The life of Brian

The first week of October was quiet for Brian Harding. He rode a winner at Kelso on Arc day and would not ride again for the rest of the week. The nearest fixture to his home in Blencowe, Cumbria, was more than 200 miles distant at Ludlow.

Tracking him down was less than straightforward, however. When he eventually called back he sounded slightly breathless. “I’ve been flat out,” he says apologetically, before proceeding to be helpful and courteous in equal measure. 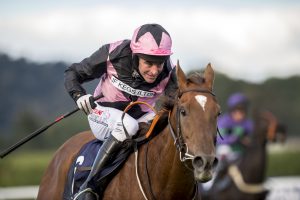 These are not traits readily associated with racing folk in this day and age. But then, Harding is not really of this day and age. At 44, he is a few months older than Andrew Thornton, who makes great play of being the dinosaur desperately seeking his 1,000th career winner ahead of his retirement.

In the north, where he plies his trade, Harding’s weighing-room peg has been closest to the door for longer than he cares to remember. The peg denotes his seniority by age but Harding defies the stereotype in more ways than one. He has never been more prolific in the saddle.

The man who had never previously breached 40 winners posted 56 and 42 winners in the last two campaigns. While the jockeys he grew up with have long since swapped riding boots for slippers, Harding yearns for the season to gather momentum.

You’d think the busyness he alluded to was geared towards that end. Renewing alliances after the summer break, riding out as much as possible, touring border yards and beyond which might be fertile sources of rides in the months ahead. But that is not his way.

Busyness is relative where he is concerned. His way is to savour what remains, which precludes rushing around like a turbo-charged conditional. “These days I generally stick to riding out for Nicky [Richards] a couple of days a week,” he says. “Sometimes I ride out for Jedd O’Keeffe, who’s a lovely fellow. The odd day for Micky Hammond, but that’s about it.”

Harding’s personal life reached something of a crossroads in 2013. He extricated himself from a failing marriage and started again, buying a house in a part of England that has become a home from his Irish home. What sustained him in the preceding years were the horses. Riding sated him in winter and breaking in stores took care of the summer months.

“I’ve been breaking horses for seven or eight years,” he says, the process dispensing the only kind of mental therapy a man like him would be receptive to. “I broke ten horses at Nicky’s yard this summer. I just tip away with my girlfriend Kelly [Gale, who also works for Richards]. We’re just happy working together, breaking horses in the summer, enjoying life.”

Harding believes this rural idyll is largely responsible for his second professional coming. “When things are going well everything seems easier, somehow,” he says. “There’s definitely a fair chance it has something to do with me being very happy personally. Maybe it brings a different outlook on life.”

I just tip away with my girlfriend Kelly, We’re just happy working together, enjoying life

It’s refreshing to hear Harding speak in such terms. It telegraphs his maturity, especially for one who has had only two trainer tutors, both of them redoubtable, and whose father was never inclined to enunciate his feelings.

He grew up in Castletownroche, near Fermoy, a part of Ireland synonymous with jumps horses. Coolmore’s National Hunt stallion division at Castlehyde was nearby, as was Liam Cashman’s Rathbarry Stud, which in Harding’s youth stood a single jumps stallion in Proverb. The area is a hotbed of hunting and point-to-pointing.

Harding’s father had a dairy farm and broke in horses on the side. In his youth, two felicitous events that would become inseparable were responsible for shaping Harding’s life.

“Jonjo O’Neill also came from our village,” Harding reminisces. “It’s a small place, so that was a big deal. Jonjo was my hero and my father broke in Dawn Run, whose career we obviously followed closely.”

The two episodes fused on that unforgettable day at Cheltenham in 1986, when O’Neill partnered Dawn Run to win the Gold Cup. To this day the mare remains the only horse ever to complete the Gold Cup/Champion Hurdle double.

“I was too young to remember my dad breaking in Dawn Run at home; I was only six or seven at the time,” Harding says. “But I was at secondary school when she won the Gold Cup. We listened to it on the radio.”

It must have made his father feel terribly proud. “I imagine so,” Harding says. “My dad was a man of few words when it came to things like that. You’d think he’d be over the moon but he’d never say so himself. He was a brilliant horseman but tough enough.”

It was Harding’s father, also Jonjo, who set him on his career path. He was a friend of Cashman, who arranged for the 15-year-old to join Kevin Prendergast at the Curragh, where he rode five winners on the Flat over three years.

“I was light enough then,” Harding says, “but I never wanted to be a Flat jockey. Jumping was always for me, so one day, when Kevin sold some horses to Gordon Richards, I went over with them on the horsebox and arrived at Greystoke [where Richards trained] in 1992.”

Harding thus moved from one demanding taskmaster to another. They would shape his life. “Kevin was a great help to me,” he reflects of Prendergast. “Gordon [father of Nicky, who trains at Greystoke Stables today] was a very hard man but also I would say very fair. He did things his way, very properly, and that was it. He had a massive influence on me.”

An upshot of moving to Greystoke was that O’Neill happened to train in the nearby village of Skelton before he moved south to Jackdaws Castle. Not before Harding was able to renew the family link, however. 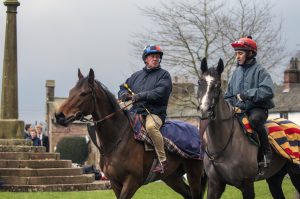 Harding with boss Nicky Richards riding through the village of Greystoke

“It was nice to make the connection,” Harding says. “I have ridden a couple of winners for Jonjo and we almost had the day of days when I rode [the O’Neill-trained] Simply Gifted to finish third in the [2005] Grand National. I got a fantastic ride that day. No feeling like it.”

But it was under Richards’s fiercely protective wing that Harding flourished. It was a slow ascent at a time when Richards’s stable jockey was Tony Dobbin. Yet even Dobbin was sometimes obliged to stand down when one of the stable stars – and Richards had more than a few – travelled south.

One Man epitomised this state of affairs. Dobbin rode the formidable grey chaser for one and a half seasons, by which time One Man was a raging favourite for the 1996 Cheltenham Gold Cup. But Richard Dunwoody took over the reins when One Man limbered up at Sandown two months before the big race.

Dunwoody stayed aboard for the next two years, when the combination annexed several big races – albeit none at Cheltenham. And when Dunwoody jumped ship, Dobbin reunited with One Man to win at Ascot in February 1998. Dobbin would get his chance aboard the grey in the Queen Mother Champion Chase at Cheltenham the following month.

Harding watched all this from the shadows. The weekend before Cheltenham he’d made plans to fill in at the week’s minor meetings but Dobbin injured himself 24 hours before the big race. Richards had no hesitation in summoning Harding for One Man.

“The horse had plenty of knockers,” Harding recalls. “His record at Cheltenham wasn’t good. He probably didn’t stay in the previous two Gold Cups, so there wasn’t an awful lot of pressure because of that.”

In the event Harding rode One Man with conviction and the combination galloped out to a triumph that generated euphoria in packed grandstands. It was demonstrably the highlight of Harding’s career to date, even if the occasion passed in something of a blur.

“When something really big like that happens, you’d love for it to happen again so you can take in a bit more of it than you did the first time,” he says of that day.

Yet the most poignant memory for Harding was Richards’ loyalty in the build-up – and not just the fact Richards gave Harding the ride.

“In 1996 I had a double fracture of the skull and there was some bruising to my brain,” he relates.

“I was stood down from riding for a year, which was a bolt out of the blue. So I spent that year working in the yard, and when I was able to start race-riding Gordon got me going again. It was less than three months from my first day back to when I rode One Man at Cheltenham.”

Gordon Richards did things his way, very properly, and that was it. He had a massive influence on me

Conversely, One Man’s death at Aintree three weeks later made a perfect vignette of the ups and downs of a jump jockey’s career. “The ground was quite soft, so whether that caused him to fall I don’t know,” Harding says. “It wasn’t nice for anyone; it wasn’t nice for racing, actually, because the horse had a big following. And Gordon was quite poorly at the time.”

Those were halcyon days for jump racing in the north, which now struggles to muster runners at the big winter festivals. “I don’t really know why that is,” Harding laments. “Back then, I suppose a lot more country people bred and raced horses.

“But the way I look at it is that Nicky has 75 horses. He’s busy enough again, and he has Simply Ned, Eduard and a lot of good young horses coming through. So I want to enjoy everything and just see what happens.

“There are no targets for the season, nothing special, although we all love to win good races. But one thing I know is that you’re a long time retired.” 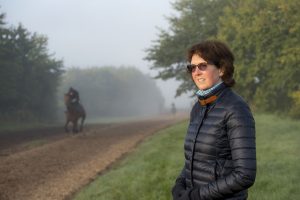 Up Next
Stylish staying power