The Last Lion to stand at Hedgeholme Stud

The Last Lion, winner of the Group 1 Middle Park Stakes, is on the move from Darley’s Irish arm at Kildangan Stud to stand at Andrew Spalding’s Hedgeholme Stud in Durham for the 2021 breeding season.

Trained by Mark Johnston, The Last Lion won four times as a two-year-old including the Brocklesby, Group 3 Sirenia Stakes and the aforementioned Middle Park Stakes.

Since retiring to stud, the six-year-old is the sire of winners Kraken Power, King Of The Lions, Rafiki, Macmerry Jim and Chosen Mark. He will stand for a fee of £4,000 at Hedgeholme.

Spalding, speaking to Racing Post Bloodstock, said: “He was Yorkshire-trained and successful in the Brocklesby, a really fast horse, which is what we need nowadays.

“He was never out of the first three in all ten stars, and Group 1-winning two-year-olds are hard to come by. When you look at his progeny so far, a large number are consistent and paying their way.” 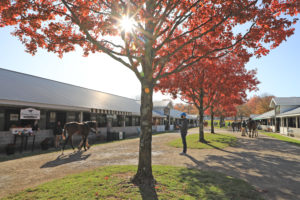 Up Next
Satisfaction as stable Keeneland November concludes