Australian broodmare Gold Locket, a daughter of the VRC Sires’ Produce Stakes-winning Scenic stallion Lochrae, posted a remarkable achievement on February 13 at the southern New South Welsh country racecourse Wagga when she was represented by four runners on the card, two of whom won.

The afternoon did not get off to a particularly good start for Gold Locket when King Marvin, her five-year-old son of the Marscay stallion Marwina, finished seventh of the 10 runners in the second race, a 1200m maiden. Her second runner Lockmar, a nine-year-old full-brother to King Marvin, fared only slightly better, dead-heating for fourth of the six runners in the third race, a 1050m Benchmark 70 handicap.

Things picked up for Gold Locket in the fourth race, a 1050m maiden for two-year-olds and upwards, when her two-year-old son Lightning Alert won by half a length – which was a good effort as the place-getters were three-year-olds who were giving him only half a kilo.

The mare then completed her double when Power Alert, a full-brother to Lightning Alert, won the seventh race, a Class Three handicap over 1200m.

Lightning Alert and Power Alert are both sons of the grey Argentinian-bred Southern Halo stallion Alert, who stands locally at Kooringal Stud and who is a prolific sire of winners in the Riverina.

All four of Gold Locket’s children are trained on the track at Wagga by Trevor Sutherland. 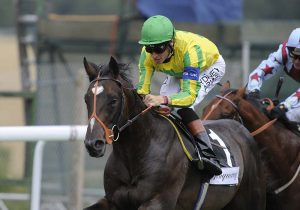