The Fugue on song again

By The Owner Breeder staff 08 September 2013

The Fugue laid down a challenge to her stablemate Elusive Kate for the title of top mare in training in Britain with yet another first-rate victory on Saturday when she overhauled Al Kazeem to win the Irish Champion Stakes at Leopardstown.

A drizzly day left her trainer John Gosden and owners Lord and Lady Lloyd-Webber uncertain as to whether they should even ask the daughter of Dansili to take her place in the line-up after she demonstrated her love of a fast racing surface with her scintillating Yorkshire Oaks victory last month.

Juddmonte International winner Declaration Of War was an early defector but The Fugue stood her ground and repaid her connections for their decision to race by recording her third Group 1 success and second from just four starts this season. She may now head back to Santa Anita for another attempt at the Breeders’ Cup Filly & Mare Turf, in which she finished third to Zagora last year.

The Fugue’s top-flight win contributed to another red-letter day for Dansili, whose British-bred son Foreteller got the ball rolling with victory in the Group 1 Makybe Diva Stakes at Flemington. Dansili also featured as grandsire of two Group winners on Saturday – La Collina, a daughter of his son Strategic Prince, won the Group 1 Matron Stakes on the same card as the Champion Stakes, while Top Notch Tonto became a first stakes winner for Thousand Words, a former Juddmonte flagbearer by Dansili who now stands at Rathasker Stud.

Saturday’s victory for the Lloyd-Webbers’ homebred was the fifth Group 1 win for champion trainer John Gosden this term. The master handler has guided Elusive Kate to success in the Falmouth Stakes and the Prix Rothschild, while Winsili, another daughter of Dansili, won the Nassau Stakes at Glorious Goodwood.

The Fugue’s half-brother by Shamardal is being offered by Watership Down Stud as lot 197 in Book 1 of the Tattersalls October Sale which runs from October 8 to 10. 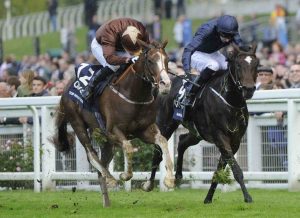 Up Next
Tonto proves Top Notch at Haydock