It was announced last September that Haras de Gouffern and leading American consignor Taylor Made Sales would join forces to consign together at the 2019 Arqana August Yearling Sale, with the catalogue recently revealing an offering of four.

It came off the back of an arrangement between Taylor Made and International Thoroughbred Consultants (ITC), whose President Jean-Pierre de Gaste is also President of Haras de Gouffern et de la Genevraye.

“A few years ago, ITC and Taylor Made established an agreement where ITC would represent Taylor Made in France and the Middle East, while they would do the same for us in the US,” explains de Gaste. “We always look for opportunities to expand our business and when Alexandra Saint-Martin joined our team two years ago from Arqana, she concentrated on creating this joint consignment.”

Even this, though, was a long time coming. “I’m great friends with Duncan Taylor [President and Chief Executive Officer of Taylor Made Sales] and we’ve done a lot of business together over the years. For my Middle-Eastern clients, I have bought a large number of horses in training, broodmares and stallion prospects in the USA, often from Taylor Made.”

Innovation is very much at the heart of the new partnership, and is a very important element of any project, de Gaste believes. “We, as an industry, very much need to innovate,” he says. “We are far too attached to tradition and are afraid of change. This fear of losing stability is stunting our progress.”

“We believe it’s very important for any business to innovate”

Indeed, de Gaste has never been afraid of change and a perfect example of this was his brokering of the Qatar sponsorship of the Prix de l’Arc de Triomphe. “At the time, many criticised France-Galop for accepting the deal, because they saw it as sacrilege to have an Arab race on Arc day,” he explains. “But, now, you can see the benefits. The Al Thani family attended the Arc meeting and were completely enamoured by the atmosphere; it was at that stage that they decided to become involved in thoroughbred racing, having raced only Arabian horses until that point. Their involvement and success has created a ripple effect, where many in the Arab racing world have now become involved in thoroughbred racing.”

An open mind also applies to Gouffern’s methods in consigning with Taylor Made Sales. When questioned on whether the shared yearlings were prepped by the French farm’s methods or adapted to suit Taylor Made, de Gaste says: “Of course, we believe it’s very important for any business to innovate. We have to learn from the US sales and take some of their methods to improve our own, to perfect our formula.”

De Gouffern received the American-bred yearlings in January, allowing the young horses time to settle in and adapt to their new environment.

Lot 92, a son of Giant’s Causeway, has a pedigree familiar to both American and European buyers as a grandson of the high-class French filly Mysterious Lina. “He’s a lovely, big colt and is very well-balanced,” says de Gaste. “What is interesting about him is that he has a lot of European blood – his granddam was very good in France, while he has a lot of [damsire] Empire Maker about him, too. It is very difficult to sell purely American horses in Europe and the Giant’s Causeway colt is our idea of the perfect blend of American and European influences.” 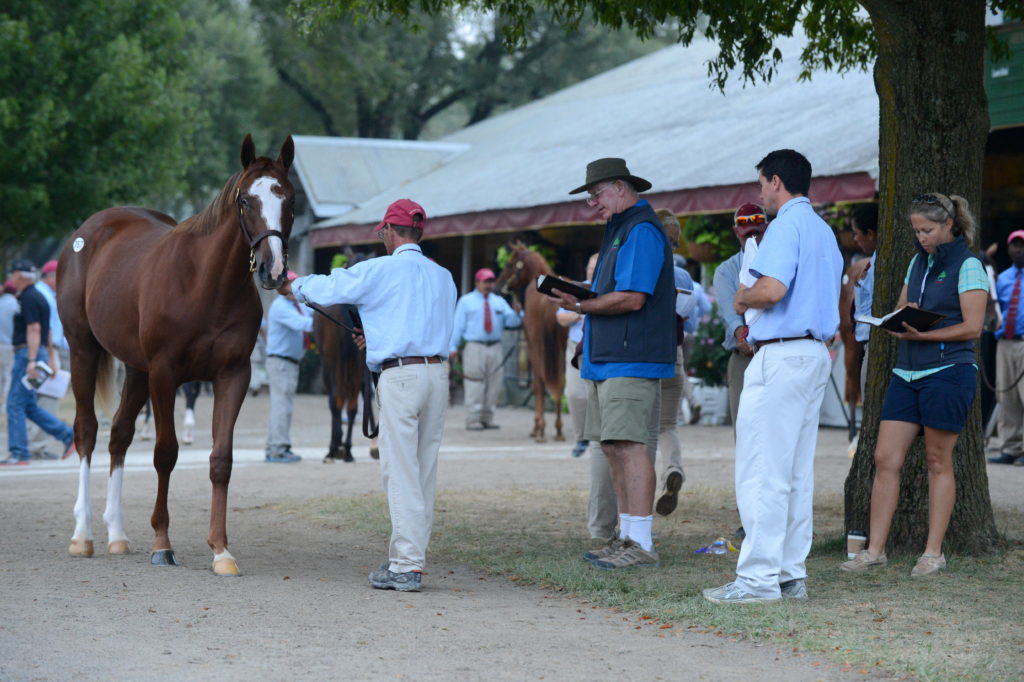 There are not many chances left to obtain progeny of the ‘Iron Horse’, the great racehorse and top sire having passed away in 2018. The colt’s dam, Grey Lina, proved herself at stud from an early stage, with her second foal, a colt by Myboycharlie named Royal By Nature, scoring at stakes level in the US for Brad Cox.

Lot 159 is a son of Yeomanstown Stud sire Gutaifan, whose first two-year-olds have made a bright start this season. A grandson of the outstanding mare Saganeca, the bay’s pedigree is one rich in black-type.

“This colt has a marvellous pedigree,” says de Gaste. “As everyone knows, Saganeca has been a fantastic mare and it’s a very current family. Japan [another grandson of Saganeca] has done very well recently, winning the Grand Prix de Paris in addition to the King Edward VII Stakes at Royal Ascot.”

Completing the draft are a pair pinhooked by ITC as foals; a first crop son of The Gurkha (Lot 184) and a colt by Iffraaj (Lot 281).

The Gurkha colt, like his Gutaifan compatriot, comes from a top French family which remains very active. “The Gurkha colt comes from the family of the top French mare Chicquita, as well as the talented Magic Wand and recent French Oaks winner Channel,” says de Gaste. “This colt is bred to be a miler and looks built for speed.”

There are also sure to be updates aplenty for the Iffraaj colt out of stakes performer Imperialistic Diva. “The Iffraaj colt is very handsome and has a very active pedigree – Imperialistic Diva’s two-year-old by Exceed And Excel won her second start on July 1 and connections apparently like her very much,” he says. “This colt has a lot of class, so we have high expectations.”

The juvenile sibling in question, named Mia Diva, is trained by John Quinn for Phoenix Thoroughbreds and is a full-sister to last year’s Firth of Clyde Stakes winner Queen Of Bermuda.

Up Next
Japan mourns loss of King Kamehameha