The Finish Line – with William Derby

William Derby is celebrating his twentieth season at the helm of York racecourse – and he has much to celebrate.

William Derby is celebrating his twentieth season at the helm of York racecourse – and he has much to celebrate. With a longstanding commitment to providing excellent prize-money and a top-class raceday experience for owners and racegoers alike, few have a bad word to say about York, a regular Racecourse of the Year winner which has had its most prestigious race, the Juddmonte International, recognised as the world’s best horserace twice in the last ten years. Unusually, Derby holds the dual role of Chief Executive and Clerk of the Course, but with a horsey upbringing and a professional background as a qualified accountant he is well equipped for both.

I took over from John Smith at York in 2003 and the years have simply flown by. I’m not aware of anyone else at the bigger courses who combines the roles of Chief Executive and Clerk of the Course, but I’m very well supported on both sides of the business, on the racing side by Anthea Leigh, who looks after all things racing and equine, and on the business side by an excellent management team. Having the same person heading up both sides works for York, because it keeps racing front and centre strategically in everything we do.

A role that caters for both my passion for sport, and racing in particular, and also for my background in business suits me well. Horses are in my DNA and I qualified as a chartered accountant at PWC’s Cambridge office, where I had bloodstock and racing clients in Newmarket, before joining Ascot, initially as Head of Accounts and later as Commercial Director. Growing up I did pony club and eventing, and I took our eventer from novice to advanced level. I also helped subsidise student life by riding out for Tom Kemp and Colin Weedon. I now have an ex-racehorse, called Locked Inthepocket, who is enjoying his retirement as a much-loved family pet, exploring every corner of Yorkshire hacking alongside my eldest daughter Sophie.

Having ‘completed the circle’ in order to stage the long-distance races for Royal Ascot at York in 2005, we undertook the biggest track infrastructure project of its kind in 2008 and 2009. We’ve continually invested in the racing surface since, with a state-of-the-art irrigation system, widening the track and applying world-leading agronomy under the expert eye of Head Groundsman, Adrian Kay. But there’s lots more development work we’d like to do in order to make York the best racecourse it can be, and I don’t think you ever get to the end of the rainbow.

Everyone at York is looking forward to a return to normal, starting with a Dante Festival crowd for the first time since 2019. We are offering record prizemoney of £10 million, which is £2.5m more than we offered last year and £1.2m more than our previous record in 2019. The York Race Committee have made a big investment in prize- money across the board, with no race worth less than £15,000 and the country’s richest maiden, richest nursery and richest Group 2 and Group 3s for juveniles. We are trying to cater for all stratas and to reward people who have kept their horses in training during the pandemic.

Prize-money is hopefully a big part of what makes York so popular with owners, but there’s a lot more to it. We also work hard on the owners’ experience, and they love the atmosphere of York. Competition between the local trainers and the big battalions from elsewhere makes for a real cauldron of the best competition. It’s hard to win at York, so it’s all the more meaningful when you do.

We are staging a syndicates day on the Friday of the Dante meeting. We have invited syndicates from all over to come along and display their wares to racegoers and to parade any horses that they have for sale. We welcome syndicates here and provide six badges and six lunches per horse. The lunches can be swapped for extra badges, and extra badges can be bought at a discounted rate.

We had a £1m Sky Bet Ebor in 2019, and at £500,000 this year the race is still by many miles the richest Flat handicap in Britain. This year we have put £400,000 into the Sky Bet City of York Stakes, making it the richest racecourse-funded Group 2 in the calendar. We’ve got ambitions for the race to be a Group 1 because Britain still doesn’t have a seven- furlong Group 1. Last year’s winner Space Blues went on to land the Foret and the Breeders’ Cup Mile, and the 2018 winner Expert Eye also won at the Breeders’ Cup. We hope the ratings justify the upgrade.

York is very proud of its long association with Macmillan Cancer Support. What started as Timeform Charity Day in 1971 has raised over £9m for Macmillan, and the six-furlong handicap once won by Sheikh Albadou is still going strong. The Macmillan Ride of Their Lives charity race has raised over £1.2m over the last decade, and there’s a new charity skydive this year in which Anthea, Maiti Stirling, our Marketing Executive, and Louise Daly, our Commercial Director, are taking part.

I find it difficult to choose when I’m asked for a favourite York memory. Frankel’s Juddmonte International in 2012 was very special, and Sea The Stars’ win three years earlier was another highlight. Staging Royal Ascot at York in 2005, and then the St Leger before a sell-out crowd in 2006, were also happy occasions. Hopefully there are any more still to come. 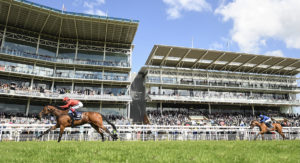 Up Next
Emily Upjohn advertises Oaks credentials with Musidora romp