Richard Johnson announces his retirement from the saddle
Stories

The Finish Line with Trevor Hemmings

The Grand National has been around me a very long time and I’ve always been a great follower of the race.

It all stemmed from my time working for Fred Pontin, for whom I was building the Ainsdale holiday centre in Southport when he won the 1971 Grand National with Specify, and also through Ginger McCain and Red Rum, who I would see regularly close to the site.

However, it wasn’t until 1985 that I had my first horse – Northern Trust, who was a winner on the Flat at Bath – and it was 1992 before I had my first Grand National runner, Rubika, who finished down the field.

I must have had a dozen or so runners in the race and not much luck before Hedgehunter in 2005, when I had a brilliant jockey in Ruby Walsh and a brilliant trainer in Willie Mullins.

That was a real family success, with Willie’s parents Paddy and Maureen both present, as well as his wife Jackie and their son Patrick, and it was marvellous being a part of it.

It was very special and finally achieving my ambition was the highlight of my racing life so far. It was in the old winner’s enclosure too, which had such a unique atmosphere. I was quoted then saying that my life was complete, but it turned out it was only part one of it.

Ginger McCain and I didn’t always see eye to eye as we were both very competitive and probably too similar.

It was just banter though and I’m glad he was at Aintree, though poorly and in his last year, when Donald won for me with Ballabriggs in 2011. Hedgehunter had done it all easily and was a 14-length winner, but when Ballabriggs got to the finish he’d given so much that he needed oxygen to help recover. He’d been superb that day, racing in the first six or so all of the way.

Many Clouds was a wonderful horse. You will never see a horse give more than he gave every time he ran, and the day he collapsed and died after beating Thistlecrack in the Cotswold Chase at Cheltenham the whole crowd was in tears.

I’d bought him as a foal as he was a dead ringer for Cloudy Lane, who had started [Grand National] favourite one year, and we had such a lot of fun with him. It was always with the Grand National in mind one day, as it is with all of them. 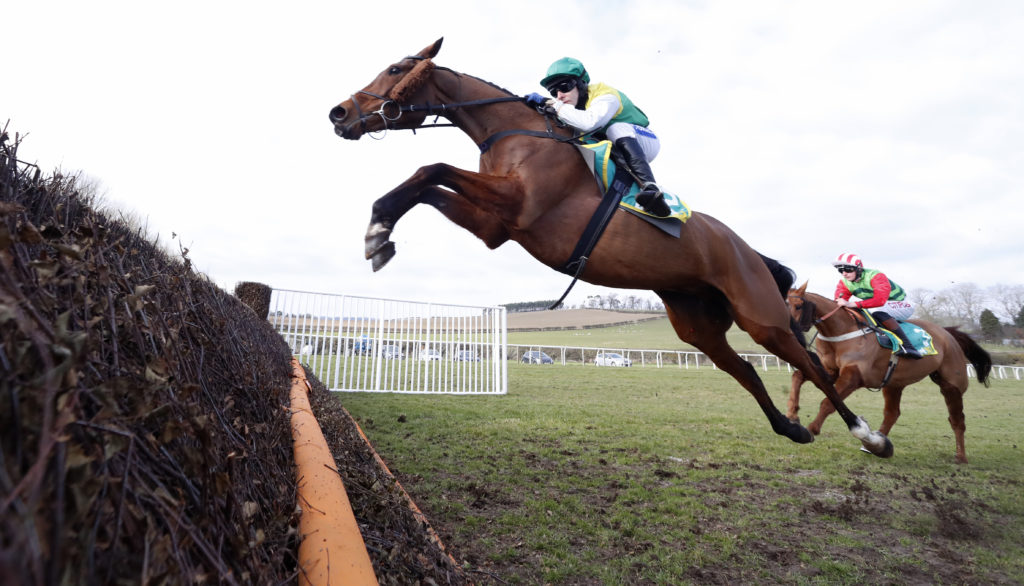 Cloth Cap warmed up for a tilt at this year’s Grand National with victory in Kelso’s Premier Chase in March – Photo: Dan Abraham – focusonracing.com

I have a lot of time for Michael O’Leary but I dismiss his arguments about Tiger Roll’s Grand National weight as banter.

We would all like our runners to have less weight, but Hedgehunter had 11st 12lb every time he went back to Aintree, even as a 12-year-old, and when Many Clouds went back after his win only a Gold Cup winner carried more. It’s the same for nearly all winners and Tiger Roll can’t have preferential treatment.

Horse welfare is a big issue at present and I like to think mine have a better life than me.

A lot of them come back to me when they retire, and we have about 35 horses here at the moment, including some Shires and Suffolk Punches. Among them are both Hedgehunter and Ballabriggs and also some of the other top-notchers like Albertas Run and Trabolgan.

We find good homes for others and quite often allow a good groom to keep a horse they have cared for, which is what happened with Cloudy Dream.

The last year hasn’t been pleasant for anyone, and I’ve been suffering silently like everybody else, but it’s the people who have lost family and friends to the pandemic that I feel for.

I haven’t left the Isle of Man since February 2020, and we’ve stuck to the rules, which have been very strict but very fair. We’ve run a lot of businesses in the UK from here.

We’ve kept 360 closed pubs going, with a lot of staff furloughed, and we’ve kept a lot of other businesses going without furlough. After the experience of 2007 and 2008, when we all lost massive amounts of money, I ensured that all my businesses had more ‘wool’ around them in order to survive a crisis, and when I cut back on my horses it was to make sure that the bills could be paid for all of the other things.

As some will know, Preston North End is another passion of mine and I’m pleased to say the club is completely debt free, with all taxes and wages paid.

I wasn’t going to buy Cloth Cap but my Racing Manager, Mick Meagher, liked the Old Vic in his pedigree and he might have sulked if I hadn’t!

The name was the idea of Kathryn Revitt – the boss of me, as well as my businesses – and as he’s out of a mare called Cloth Fair he couldn’t really have been called anything else if he was going to be racing for me.

After his Kelso win, where he carried the green cap, he will carry it again at Aintree, even though it’s my second colours in the UK. The green cap is my first colours in Ireland, which is why Hedgehunter had it, but you don’t get any more Irish than Jonjo O’Neill, so we are going with it again.

They tell me Cloth Cap is better treated than Hedgehunter was when he won.

If he enjoys the same sort of passage through the race he should win. I’ve also got Lake View Lad and Deise Aba entered, and both are nice horses who should run well. But I learned long ago that you don’t get anywhere in the Grand National without luck in running – even with 14lb in hand.

Up Next
Richard Johnson announces his retirement from the saddle