The Finish Line with Ted Durcan

When Ted Durcan retired from the saddle four years ago at the age of 44, he had been champion jockey in the UAE on seven occasions and partnered around 1,500 winners worldwide, including Light Shift for Sir Henry Cecil in the 2007 Oaks and Mastery for Godolphin in the 2009 St Leger. He already had a close working relationship with Newmarket trainer Sir Michael Stoute, which continues to this day, and he also rides out for William Haggas. The Irishman is now using his considerable experience to help the next generation of riders as a jockey coach while also building up his thriving Durcan Bloodstock business. Happiest when busy, he is a man of many parts.

The thing I am most proud of from my time as a jockey is that I ended up riding for most of the trainers who had been my idols when I was growing up as a racing nut at boarding school. My achievements in the saddle were modest and nobody needs to tell me I wasn’t the most natural jockey, so I know how lucky I was to ride two Classic winners. They were lovely moments, and being leading rider in the UAE was a  huge kick too, but with hindsight riding winners for idols like John Dunlop, Geoff Wragg, the Easterbys [Mick and Tim], Sir Henry Cecil, Sir Michael Stoute and many more is something I’m particularly proud of.

Racing is a way of life and so when my riding days were coming to a close I wanted to get into something else that would keep me involved in the sport and keep me interested. Plenty of areas were easy to rule out, but bloodstock was something I’d become increasingly interested in as time went on. Like most riders, I was too busy and focused in my early years to appreciate the importance of families and pedigrees, but my interest grew, and I was lucky enough to ride for some of the top owner-breeders like Godolphin and the Niarchos family.

I spent a lot of winters in the Middle East and people there would often ask me to look out for horses for them, especially older horses. I made a lot of contacts and buying horses in training for them is a big part of my business. I still buy a lot of older horses for Saudi Arabia and Dubai, but I’m also supported now by a lot of trainers in England and Ireland. Owners have increasingly been more than happy for me to source their yearlings, breeze-up horses and breeding stock, and I must have bought 75 to 80 horses in the second half of last year. I find it mindblowing how resilient the bloodstock industry has been with all that has been going on. It just shows that the racing world is made up of very brave people who are happy to put their money where their mouth is and press on.

While Dubai has led the way for racing in the Middle East there’s no question that Bahrain, Qatar and Saudi Arabia have all massively upped the ante in recent years. The amenities and facilities, especially for the horses, are absolutely first class now, and it’s also easier to travel horses, so owners are a lot more open to it now. I used to ride now and again in Riyadh but when I went out there for the first Saudi Cup in 2020 it was my first time there in five years or so – I was amazed at the transformation. I was back again in February and the progress made there, and elsewhere in the Middle East, with first-class turf and dirt tracks, is extraordinary.

I have been helping out at Sir Michael Stoute’s for a number of years and I’ve ridden a lot of work for him. I now also do the same sort of thing for William Haggas, although I’ve become a bit of a fair-weather work rider! I hibernate through the worst of the winter, but once things get going, I’m riding out five or six mornings a week. I only go racing when I have a reason to, as since I retired I’ve found it can be awkward at the races without a purpose, but I love being involved with those nicer horses. Riding work also keeps me very fit.

I qualified a few years ago as a jockey coach and it’s another thing I enjoy. I’d be up to speed on the form, and I watch a hell of a lot of racing, so I don’t find it hard work at all speaking to young jockeys before and after they’ve ridden about different courses, how races might be run, and so  on. I helped Adam Farragher come over from Ireland to join Mr Haggas, and people like him are a pleasure to deal with. He’s an unbelievably hard worker and a very smart guy.

I’m aware of the whip consultation and project that’s going on at the moment, but I’m glad I’m not directly involved. It’s a difficult one, and it will be impossible to please everyone. If I was still riding, I would find it very hard to accept horses being disqualified for whip contraventions, but I totally understand why the ‘win at all costs and then accept the ban afterwards’ mentality isn’t right either. Horse welfare is a hugely important area – we have to find a happy medium.

We were always very friendly with Pat Smullen and his wife Frances, so I approached Newmarket a year ago about sponsoring a race in Pat’s memory. They couldn’t have been more helpful, so we are looking forward to doing it again at the Craven meeting, and hoping that Frances will be able to come over this time. It isn’t much, and Pat wasn’t going to be forgotten in a hurry anyway, but he was always very popular when he came over here to ride. It’s hopefully a nice way to remember him. 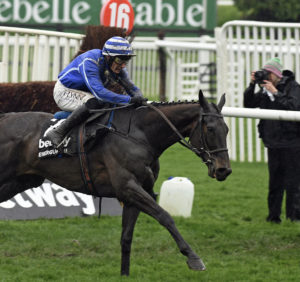 Up Next
Energumene peerless at Punchestown