The Finish Line…. with Simon Sweeting

Overbury Stud heads into the 2022 season off the back of one of its best years under the stewardship of Simon Sweeting. A good year with its graduates on the track was buoyed by the achievements of resident stallion Ardad, for whom a flying start at stud consisted of 23 first-crop winners led by Group 1 winner Perfect Power. Anticipation also runs high for the prospects of Jack Hobbs, whose first crop have turned three, as well as Frontiersman, whose first yearlings have been well received by breeders. Time will tell whether either can fill the void of the pensioned stud stalwart Kayf Tara but there is plenty for those at Overbury Stud to look forward to nonetheless.

I came to Overbury Stud in September 2000. Kayf Tara retired to us that autumn, but then it was foot and mouth the following year, which was a bit painful. Kayf Tara still covered 160 odd mares and then Bertolini arrived the following year and it went from there. Bertolini became the champion first-crop sire of his year – I still have the European champion firstcrop sires list from 2005 in my office, with him at the top and Galileo in 11th.

It’s a 220 acre stud that sits on the Overbury estate. Tim Holland-Martin bred some very good horses here before me, the likes of Grundy, College Chapel and Mummy’s Pet. I’ve got a very good team in place. My assistant manager Jo Brown has been here since day one, she effectively runs the stud and is the lynchpin of the place. Dan Matty is responsible for the stallions and we also have two very good senior staff in Matt Jones and Kirsti Windsor.

Ardad was extraordinary last season for us. I remember ringing round the trainers this time last year and Mick Easterby saying to me ‘I don’t know how good they are but they’re all sober’. What he meant was that they’re sensible horses, and that was something all the trainers said, that they eat and sleep but they’re on it when you need them to be on it. That’s very similar to himself – he’s a chilled character, very straightforward to deal with.

It was lovely that he got off to such a fast start last year as it meant he got a book of 160 mares. He’ll cover around 175 this year – I will not stretch to 200. We’ve got some really super mares lined up. A lot of people, including smaller breeders, have done well with him, which is tremendous to see.

Jack Hobbs retired to us at the same time as Ardad and is one of those horses who makes life easy. Obviously he was a tremendous racecourse but breeders who come to view the stallions usually pick him out on looks as well. He has a huge presence to him and he’s a lovely mover, very imposing with a lot of quality. He’s covered good books of mares, so has every chance, and now it’s in the lap of the gods. It would be great if he could sire a couple of good horses on the Flat. He had two two-year-old runners last year and both were placed – one of them, The Gadget Man, was third at Newmarket for Ralph Beckett and looks promising.

We’re very pleased with Frontiersman’s first foals. They’re all peas in a pod, they  look just like him. We covered 65 with him in his first year and then the foals came out last year, and we got just over 100 mares to him. I sent the dam of Thyme Hill to him. It’s going to be harder for him to make it than Jack Hobbs but he has enough on the ground to have a chance.

He was an extremely good racehorse, especially considering what a tough time had has a young horse. He had two colic operations as a youngster and then an eye infection which took a long time to clear up. Yet he still ended up rated 116 – he must have been extraordinary tough to overcome all that. And you  couldn’t find a better bred horse, with him being by Dubawi out of Ouija Board. He has Dubawi about him but I also see a bit of his damsire Cape Cross.

It’s an interesting year for Cityscape as he has his largest crops running for him. The trainers like them as they’re sound,genuine horses. Schiaparelli has a very strong fan club. He produces good, tough runners. Indefatigable is a very good mare and Ronald Pump has been second in four Grade 1s – he deserves to get his head in front in one.

It’s always been very difficult to get stallions and then once you have one, you have to get lucky with them. The market is more focussed now on precocious speed and less appreciative of the middle-distance horses. But there’s no point fighting against that if that’s what the market wants.

Hopefully we’ll have another good season. We’re in a good place at the moment with Ardad flying the flag and others coming through. And I can look out and see Kayf Tara, and be reminded of what he achieved. It was extraordinary how dominant he was. He’s 28 now and in great shape. He has his routine, he goes out in the paddock and has a buck and a kick. The quality of our broodmare band is also improving, which shone through on the track. We also had a good foal sale and sold well at the yearling sales. I take great satisfaction from all of that. 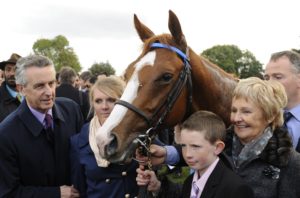 Up Next
Home Support