A trainer of 30 years’ standing, Phillips felt compelled to defend the sport he loves and came up with the National Racehorse Week concept, which this year takes place from 10-18 September.

National Racehorse Week, which runs from September 10-18, is the brainchild of Richard Phillips. A trainer of 30 years’ standing, Phillips felt compelled to defend the sport he loves after hearing that popstar Taylor Swift had refused to appear at the Melbourne Cup following criticism on social media around animal cruelty concerns. Encouraged by friends within the industry to make his mark at a political level – and having heard about National Nut Day on the radio – Phillips came up with the idea of celebrating the racehorse. Support from industry stakeholders saw the inaugural National Racehorse Week take place in 2021 and this year’s  event is going to be bigger than ever, with hundreds of events taking place all over the country as stables in the major racing centres open their doors to the public.

Some fantastic things were already happening at open days across the country, but National Racehorse Week gives all the events more impetus. more impetus. The week is bookended by the open days in the major racing centres, beginning with Epsom/Malton and ending with the Sir Henry Cecil Open Weekend in Newmarket. Our vision is based on getting more people than ever visiting yards, especially those who have never been racing before.

The way horses interact with people is something special. Humans love thoroughbreds and vice-versa. It’s our job to get across to people how proud we are of how we look after horses and the immense contribution our sport makes to industry, employment and the rural economy in Britain. National Racehorse Week is our opportunity to do that. Getting people into yards will help spread the message about racing’s high level of care for its equine stars.

Racing shouldn’t be worried about the words ‘social licence’. We have a hell of a lot to be positive about and need to show confidence in our sport. One of the main reasons for National Racehorse Week is to showcase all the good things we do. We want to celebrate the racehorse and I think Parliament needs to know how good we are at looking after racehorses in this country. They have the life that humans should have, with a balanced diet, exercise programme, plenty of fresh air – and of course there’s no NHS waiting lists, they’re all on BUPA with private dentists, physios and 24-hour care. Maybe we should be copying how racehorses are looked after rather than worrying about how they are looked after.

The trainers have been brilliant in supporting National Racehorse Week. Last year the Andrew Balding yard allowed local schoolchildren and their parents to visit for evening stables – they were getting close to the horses, sitting on the Equicizer, wearing the colours. These are things that engage young people. Not every kid is going to be watching the Derby at Epsom from the age of six like I was. But if you expose them to something at a young age and show them how great it is, some of them will develop a passion for the sport and horses.

We have a five-year plan to cement National Racehorse Week in the racing calendar. Great British Racing did a great job last year in spreading the message on social media – we know it reached millions of people. But it’s not just about reach – we need them to experience it. The more we push the message the better for racing.

Personally, I don’t think the British public will ever put up with an animal being hit behind the saddle in the name of sport. I’ve great respect for everyone involved with the whip consultation but in my opinion it’s only a matter of time before it’s prohibited. The whip should always be held from a safety angle – for horses and humans – but ultimately it will not be allowed to be used in racing.

I’m a dual-purpose trainer though most of my owners prefer jump racing. I always say training Flat horses is O levels and training jumpers is A levels. I’ve got around 30 horses and while I’d like a few more, with the recruitment issues across the sport, having a smaller, quality staff is beneficial.

Training a Cheltenham Festival winner has been the best moment of my career. La Landiere was favourite for the Cathcart – she was one of the shortest-priced favourites at the Festival for years – so there was also a sense of relief. My old friend Richard Johnson was on board and it all went to plan.

I’ve been known for my impressions – I was always mimicking people as a child. Richard Pitman told me I should forget about training, go on TV and be the next Mike Yarwood. But the reason I did it was simply to get my name known amongst the owners in racing who might have a horse with me. Some of those very owners from 30 years ago are still with me today. I’m the last person that wants to stand up and be funny, however I took a view that unless I did it nobody would get to know who I was. I don’t regret it, although when you’re not winning races people think you should have stayed as a mimic.

You must be ambitious or you’re dead in this game. I don’t necessarily think the next young horse to walk into my yard will win the Derby or Cheltenham Gold Cup – but I’d like to think I’d know if it had a chance. Having been brought up in a village next to Epsom, the Derby is very special to me, while the Grand National is the best ten minutes of the year. They are the two most important races, though I note it costs more to buy a National winner now than it does a Derby winner.

See nationalracehorseweek.uk for all the latest news on events in September 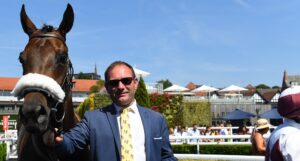 Up Next
Apple of Mick's eye