The Finish Line with Phil Kirby

I went from training greyhounds with my dad in Lancashire to playing for the under-18s at Preston North End hoping to become a professional footballer.

I was good when I was younger but gradually got worse – everyone just caught me up. David Beckham was on loan at Preston and we trained together; I don’t need to tell you he was always a class above everyone else. My fitness these days is running up and down the gallops.

We had ponies and I was able to ride, so I went for a job at Ferdy Murphy’s in Middleham when I was 19.

I had three seasons there and my first ride was a winner over fences at Sedgefield, but I quickly went downhill and didn’t have another.

Being a jockey wasn’t a long- term proposition, so I left and did a four- year apprenticeship to become a farrier. I still do a bit of shoeing today.

While I was a full-time farrier I kept point-to-pointers at Castleton, near Whitby at the bottom of the Yorkshire Moors.

I had learnt the principles of training greyhounds and realised that training racehorses is very similar. Feed them the best you can, get them as fit as everybody else’s, if not fitter, keep them healthy and concentrate on putting them in the right races.

In my second year we ended up leading hunter chase trainer. We used to exercise on the Moors and Keith Reveley leased us some boxes at his Saltburn stables and lent us his gallops for the fast work.

As numbers increased we moved to Middleham but also kept on the yard at Castleton.

I did an hourly commute each way every day, which was a nightmare, very hard work but worth it as we had more winners and things generally took off.

Amazing King was a help when he won at Yarmouth in 2009 because the owners who backed him went and bought more horses as a result.

We are now at Green Oaks stables near Catterick and well situated a mile from the A1, but in the countryside.

In our fourth year here we have 62 boxes, a rough barn that takes 25 youngsters and we plan to build another ten boxes.

A major plus is that we are on our own, and after the recent flu epidemic I realise how important that could be.

We can use the gallops whenever and however we want. We aim to continue as a dual-purpose yard and, of course, keep improving the quality.

Without my wife, Pippa, who was secretary to Ferdy, I wouldn’t be where I am today.

She does a lot with our website, communicating with the owners and organising syndicates.

The website is updated almost daily, often by the girls in the office; if we miss a day, owners get on to us so we have to be on the ball.

Pippa also sends video clips of horses to their owners and they love it.

With all her experience at Ferdy’s, Pippa likes to have her say when I am doing the entries.

She has her own ideas and sometimes we might even argue over where we think different horses should be running. For me, it’s healthy and helpful to have another point of view.

We are also lucky because some of the staff we started with at Castleton are still with us, which is nice considering all the moving they’ve had to put up with.

At Cheltenham we are hoping to have at least three runners: Top Ville Ben in the RSA Chase, Nautical Nitwit in the Stayers’ Hurdle and Lady Buttons in the Champion Chase or Mares’ Hurdle.

‘Buttons’, unbeaten in four this season, manages to get herself into a race with the minimum of effort thanks to her high cruising speed. She has plenty of class and is very good over a fence.

Her owner, Jayne Sivills, bred her and I have bought the mare, Lady Chapp, because we are doing some breeding as well. Despite his disappointing Ascot run, Top Ville Ben is still likely to go for the RSA Chase if there’s cut in the ground. He will prefer going left-handed.

I buy everything myself and haven’t used agents, just my own judgement and the help of owners.

We come up with a budget and try to buy the best we can within our price range. I like a bit of quality, a nice front and a good mover, almost floating over the ground.

It is tough competing at the sales with the trainers in the south because we haven’t the same big-spending owners in the north.

It’s a different world, but let’s hope our time comes because there are so many good owners in the north. We just want to compete with the southern lads.

I suppose you’d call me a workaholic because I don’t like being quiet and am happiest when I’m busy.

I am up at 5.45am, out by 6am to do the early feed and usually heading for bed by about 11pm. But I did enjoy our week in Les Arcs recently, even though I am not a good skier.

The kids, Izzy, 13, and Indy, 10, kept rushing past me on the slopes. They also love flying up the gallops on their ponies.

They’re both keen on racing and when Indy comes in after school the first thing she does is switch on the racing replays, rather than the cartoons and kids’ programmes.

Pippa is a well- known equine artist and is booked up for individual commissions even though she doesn’t get much time. We enjoy the busy life. 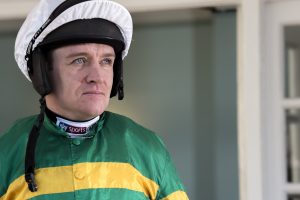 Up Next
Still on top