The Finish Line – with Michael Dickinson

Forty years ago this month, he trained the first two home in the Cheltenham Gold Cup and sent out Badsworth Boy to win the first of three straight Champion Chases, but at 72 he is contemplating returning to his roots. Michael Dickinson is the subject of this month’s Finish Line

The ‘Mad Genius’ Michael Dickinson enjoyed extraordinary success in four seasons training jumpers before a brief but disastrous switch to the Flat at Manton for Robert Sangster. Forty years ago this month, he trained the first two home in the Cheltenham Gold Cup and sent out Badsworth Boy to win the first of three straight Champion Chases. The ‘Famous Five’ Gold Cup finish came just 12 months later. Since making the move across the Atlantic, he has sent out almost 700 winners in the US, including the recently deceased Da Hoss’s two strikes in the Breeders’ Cup Mile. Having taken an eight-year break to promote his Tapeta racing surface, he  resumed training in2016. Life is good, but at 72 he is contemplating returning to his roots.

I only trained over jumps in England for four seasons and I was champion trainer three times, yet I’ve never regretted moving to the States. It is a great country, with lovely people, and I’ve been very happy here. I’d had a marvellous time training from Poplar House, and we were first and second in the Gold Cup in 1982 and had the first five in the race 12 months later. We had three winners there three years running, and we also won three King Georges and three Queen Mother Champion Chases. But after my year at Manton moving to America wasn’t a difficult decision. At Manton we had an American vet called David Lambert, who said that if I  wanted to move, he would send me 12 horses, and that was a fantastic basis for the new career, which I began from Fair Hill in Maryland in 1987.

Da Hoss was our horse of a lifetime. His second win in the Breeders’ Cup Mile at Churchill Downs in 1998, having had just one race in two years, sits right at the top of everything I’ve done. It was harder to train Da Hoss than to have the first five in the Gold Cup, but we all loved him. He brought us so many highs and even with his problems we knew he would never let us down. He wasn’t easy to train but he gave his all and he loved to win. Da Hoss was spoiled but he deserved to be. He loved going out in one of his grass fields with his best friend Boomer for two or three hours every day. He knew he was special, and it was comforting to know he was always well looked after at the Kentucky Horse Park, where he enjoyed a wonderful retirement. We will miss him.

We created Tapeta Farm as a mini Ballydoyle with the help of Nijinksy’s former exercise rider Johnny Bradston. It’s a 200-acre farm on the northern end of Chesapeake Bay, surrounded by a state park and with 50 acres of turn-out paddocks for the horses. It’s unique – easily the best private training centre in America. It’s a great place to train, but despite having won twice at the Breeders’ Cup and had eight Grade 1 wins with only 40 horses, I gave up my licence in 2007.

My wife Joan had been having some concerns about American racing. She wanted help to take Tapeta around the world and that’s why I retired. Joan liked the Tapeta surface I’d been developing but she thought she could do better. I told her she had better know more about sand, fibres, wax and polymers than anyone else, so she studied hard for several years with masses of new samples, which you can see on our website in row after row of boxes. I called them failures, she called them tests! She came up with Tapeta 10 and that’s what they’ve installed at Newcastle, Southwell and Wolverhampton.

In the USA the revolution against dirt has already started. The racing secretaries are all having trouble filling dirt races. Year after year, several dirt tracks just fall apart without warning. Turf racing is becoming more popular and Tapeta is good for when it rains and they come off the turf.

Having worked for Tapeta Footings for eight years I returned to training in 2016 and I’ve really enjoyed it. I train only for friends now – we’ve had three fillies for George and Julia Strawbridge who have all won Graded stakes races. At present I just have eight horses in training – I turn them out myself early each morning in some lovely fields, which is a big help for their minds, lungs and general health. Among them is a two-year-old full brother to the champion 2015 two-year-old Air Force Blue. It’s early days of course, but we are hoping he runs to his pedigree.

I love our trips home to England and I’m very much looking forward to returning to Cheltenham this month, having been forced to miss it last year – like almost everyone else – owing to Covid. It’s very different there now to how it was in my time, but Martin St Quinton and Ian Renton are doing a brilliant job, and it just gets better year after year. I can’t say I study the form, but I read the Racing Post online every day and I watch all the Grade 1s. Not many of those who were involved in my time are still around, but it’s always good to see those that are, along with an exciting bunch of new trainers. As for what’s going to win, you will know better than me. As the old saying goes: “You should never ask a tourist for directions.” But I can’t see any reason why the Irish dominance won’t continue for a while yet.

I’m 72 now and I think Tapeta Farm will be sold this year. It’s on the market as a training centre and two or three people are interested. If we do sell, we will probably return to England, and we are already looking at houses in Yorkshire. I’ve got two sisters there and two nephews, and Joan has two sisters too. We like Yorkshire, obviously, and it will be good to go back. Don’t be surprised if you see me at Wetherby or York one day, as a  spectator only 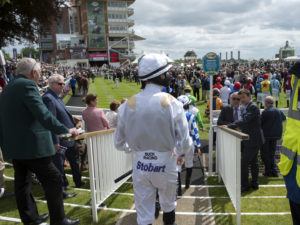 Up Next
Compromise reached over riding weight increase