The secrets to finding a bargain at the sales
Stories

The Finish Line with Lord Grimthorpe

By the very nature of the game, 80% of the job involved bad news, even in quite a good year.

I learned a great lesson in my first year with Juddmonte when Bionic was our great hope. She was favourite for the 1,000 Guineas on the strength of a spectacular win in a Goodwood maiden and I remember she absolutely creamed Wince in a piece of work on Racecourse Side.

We were really excited, but she fractured a pelvis before the Guineas and never ran again. In her absence Wince stepped up, and her win in the Fred Darling was the first winner of my management. That was a great relief, as we’d had far too many losers, and then of course she went on to win the Guineas.

I have so many happy memories of my time with Juddmonte that it’s hard to single out my favourites, but Banks Hill winning the Breeders’ Cup Filly & Mare Turf at Belmont was among the earliest of them.

Prince Khalid had been a huge supporter of the Breeders’ Cup but he had never had a winner, so when Banks Hill won so impressively it was very special for him. Of course, with her brother Dansili it was also the beginning of the Hasili dynasty, which has been so vital to Juddmonte.

Another early highlight was when Prince Khalid won the French owners’ championship by €182 from the Aga Khan in what I think must have been 2006, the year Rail Link won the Arc.

Two great owner-breeders had gone head-to-head throughout the autumn – both of them well aware of the situation – and it went down to the last day of Flat racing, which was an all-weather meeting at Deauville on December 30. Our runner was balloted out and the Aga Khan needed fifth or better. His two runners came sixth and ninth!

I was Chairman at York at the time and it was a day when so many factors came together perfectly. Henry [Cecil] insisted on coming, even though he was very frail and Prince Khalid told him he didn’t need to, Frankel was tackling ten furlongs for the first time in the Juddmonte International, and the parade ring was packed from the first race with people waiting to see Frankel, having got up that morning determined to be there. Frankel delivered spectacularly and it was a huge privilege to be involved. 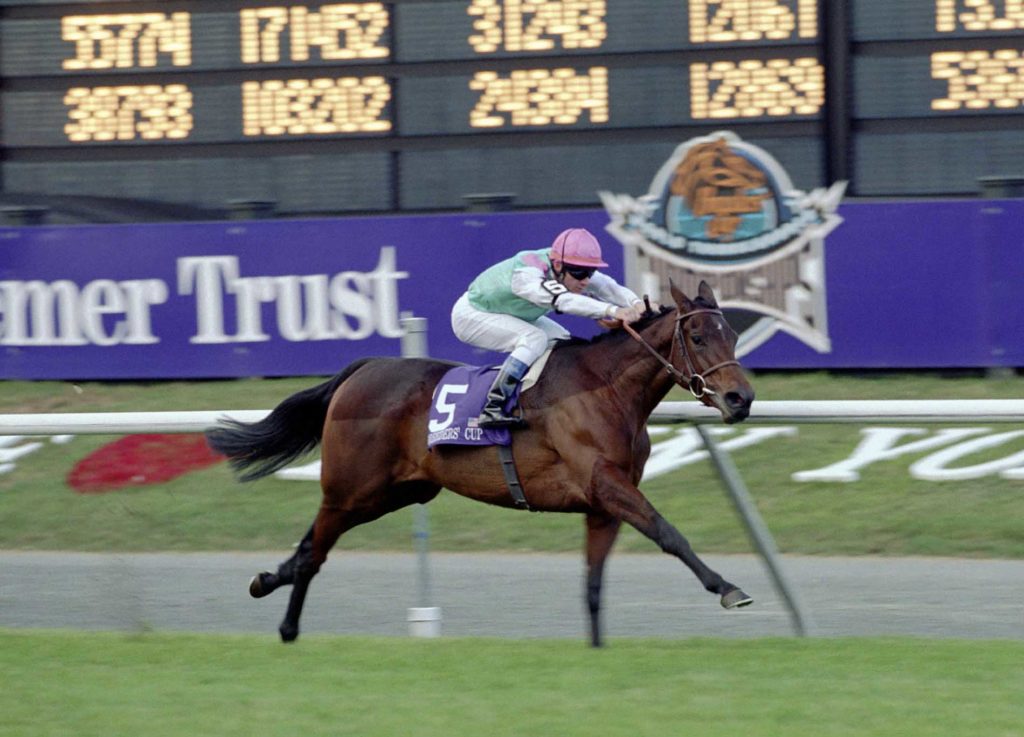 I’ve always said that pulling on the green and pink strip is like pulling on an England shirt.

It gave me enormous pride to be involved with both the people and the horses at Juddmonte, which was a huge collective in which everyone was rooting for each other as we sought to provide top-class horses for Prince Khalid, who was driving it from the front.

It was just the same at York, where when you step on the course as Chairman you puff your chest out. There’s such a great ethos running through the whole organisation there too, with everyone endeavouring to deliver top-class prize-money, top-class racing, top- class facilities and so on.

The times I’ve spent on the gallops with some of the world’s greatest trainers have been some of the happiest of my life – and sitting in the rose garden discussing Frankel with Henry was the stuff of dreams.

The racing itself was always the proof of the pudding, and I enjoyed that of course, but seeing young stock developing at Juddmonte was exciting too – all the more so because I’d got to know the families so well, male and female.

When you get to the races you don’t get that many surprises, and with Frankel I think it was pretty obvious even when he was a fairly young yearling that he might be something special.

Enable was a little different. She was nice, and she had an elegance about her, but it was Shutter Speed we were more drawn to, thinking she might be the one. It was when Enable won the Cheshire Oaks, having been beaten by Shutter Speed at Newbury, that we really started to get excited.

Enable really wanted it, like all good horses but even more so, and her combination with Frankie [Dettori], which started that day at Chester and remained unbroken, proved very special.

I had 22 fantastic years with Juddmonte but you’ve got to look forward. It’s different for me of course now, not dealing with all of the day- to-day phone calls about the horses, but I’m certainly not going to be idle.

I’ve got a non-horse project on the farm at home in Yorkshire which I want to pursue, and while I’m no longer Chairman at York I’m still on the board. I also remain Deputy Senior Steward of the Jockey Club.

I’m also talking to one other person about setting up a bloodstock enterprise. I worked for the BBA for 22 years and I think there is tremendous potential in what is inevitably a changing landscape following the deaths of Prince Khalid, Sheikh Hamdan and David Thompson. It’s something of a watershed moment for the bloodstock industry, in Europe in particular.

Up Next
The secrets to finding a bargain at the sales