Owners to return to racecourses on Saturday
Stories

May 17 was a great day – one of those days when everything worked out for me.

I thought I had some good chances. There are days when I win three races and you think you can win the next one. That day, I was going one race at a time. It’s an achievement and we did celebrate a little bit.

There is no reason for me to go back home to France – I’m doing well here.

Money-wise, I’m making a lot more money than I would in Europe. I’ve got my daughter, who is going to go to school in a few years. I wish my parents and my grandparents could see her more but other than that, I don’t miss France that much. My lifestyle is great in California – maybe in ten years I will say something different.

It was depressing when racing stopped because of the coronavirus.

All of a sudden, there was nothing. But I got to spend time with my daughter and my brother was here with his girlfriend, as they came out here right before the virus. They were supposed to stay a few weeks but stayed a little longer.

I had to get my mind back into racing.

I did a lot of workouts and cycling, and I rode a little bit in Arkansas. I have my wife, Manon, and daughter, Elena, with me. She is 18 months. It’s amazing how quickly she is growing. She does talk a lot, more than I do!

I keep in touch with the French jockeys Florent Geroux and Julien Leparoux but we don’t meet up that often.

If I travel sometimes I see them, or if they come out here [to California]. Florent and I had the same beginning – we went to school in France, we rode across France then we moved out here, though we didn’t know each other back home. Julien was a bit different because he only started [riding] in the United States.

Coming from Europe, the Breeders’ Cup was something huge, more than the Kentucky Derby.

I don’t really have a win that I treasure most of all but winning my first Breeders’ Cup race on Obviously in the Turf Sprint in 2016 was great. From that point of view, I gained the confidence of trainers and owners. Otherwise there is not one race that is better than another.

“You can’t slow down; you have to keep pushing”

United, on whom I finished second in the Breeders’ Cup Turf last year, is a very good horse.

He’s getting better and better with each race – I think he’s still improving. He’s very cool to be around and always gives a lot.

Winning the Kentucky Derby on Country House [following the disqualification of Maximum Security] was a weird feeling.

I didn’t cross the line first but at the end of the day, it’s still great to win the Derby. It’s a Derby that no one will forget, whether you agree or don’t agree with the call. I was part of it.

I wanted to be successful at Del Mar and Santa Anita.

That was always the plan, to be the leading rider. When I left France, it was to do better than I did in France. I got my mind clear and gained some confidence right away. That boosted me and now I feel great. I’m glad we finally got back in business, racing and doing what we like to do. It will be a strange year, anyway.

We are staying in trailers on race nights since Santa Anita started again.

We’ll get along with it; we all want to be as safe as possible and we’re just happy to be back riding.

I don’t have any different plans for the next few years, not really.

I’ll try to do the same and get better and better every time. You can’t slow down; you have to keep pushing. I’m pretty sure I can be better than I’m doing now; it’s a matter of continuing to work hard.

Royal Ascot? It would be great to ride there one day.

I didn’t have a chance to do it when I was in France – it would be cool [to take part] one time. 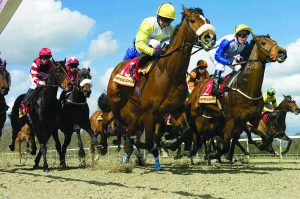 Up Next
Owners to return to racecourses on Saturday