The Finish Line with Andrew Snell

As stud groom and then stud manager, Andrew Snell was a key figure at Cheveley Park Stud in Newmarket for 32 years until his retirement in October. A popular sales figure who was honoured with the Stud Staff Award at the 2019 Godolphin Stud and Stable Staff Awards, Snell joined Cheveley Park Stud when the stud was home to 30 mares and was thus part of the team that oversaw its subsequent development into a world leader. It was a tenure that coincided with the era of the stud’s stalwart sire Pivotal, who died only last month, while Snell also takes much pride in the number of young people that he has helped train for a career in the industry.

I have been very fortunate. I’ve worked with some great people and some wonderful horses. I was brought up in the middle of Birmingham but my aunt had a small farm near Worcester with Welsh ponies and I would go there in my summer holidays. I loved it and after I did my O-Levels, I went to work in a livery yard. The guy that owned the yard had a couple of old mares and he asked one day if I would be interested in working on a stud farm. He got in touch with Sam Sheppard and Sam arranged for me to have an interview with Michael Bramwell, then a director of the National Stud.

I ended up doing ten years at the National Stud. Mill Reef was there at the time. The first stallion I ever had anything to do with was Arc winner Star Appeal and I used to exercise Grundy as well. Grundy was a bit of a handful, he was quite a character and taught me a lot.

I’m a fly fisherman. One day I happened to go and Chris Richardson came along. Chris had come back from America and was settling into Cheveley Park Stud. We could tell straight away that we were on the same wavelength and he rang me several days later to ask if I would be interested in going there as stud groom. I went in the winter of 1989. At the time, they had 30 mares. The best were at Sandwich Stud, whereas Cheveley Park, where I was stud groom, was the main boarding farm. Music Boy was the main stallion at the time.

“The whole industry owes him a massive debt”

It is Pivotal, though, who stands out – he’s been a massive influence on my career in that he was such a great servant to the stud. The whole industry owes him a massive debt. He could improve a mare. In those first few years, he was covering at £3,000 and then he started banging out the winners – that’s when we knew he was a serious stallion. Obviously the farm’s policy is to sell the yearling colts but Pivotal was too backward to prep, so he was kept. And then he goes and does all that. Good horses are straightforward and it’s that attitude that he put into his progeny. Ulysses is the same, he’s very straightforward to work with and that’s why I’m hopeful that he will be a good stallion. We need horses like him and it’s good to see him do well so far.

Queen’s Trust winning the 2016 Breeders’ Cup Turf was phenomenal. It was great for Sir Michael Stoute and my wife Steph, who worked for him, was at Santa Anita too. But for me, the horses that stand out are those who have come good when we know they’ve had issues – they might only win a little race but it’s like their Group win.

A big part of my job has been helping to train people. Sam Sheppard helped me, I’ve never forgotten that, and I’ve always tried to help other  people. I’ve had a lot of people through my hands, some trainers likes Hugo Palmer and Ed Dunlop, and then lots of stud managers and stud owners. It’s lovely to see them go on and forge careers in the industry.

I’ve worked with some outstanding vets. Don Simpson was a wonderful vet at the National Stud. Peter Rossdale gave me a real thirst for knowledge and when he retired, Andrew McGladdery took over and he was fantastic. Dermot Barry and his team were the farriers at Cheveley Park Stud. Those vets and farriers made my job easy. It is a massive team effort. The advances in veterinary medicine have been amazing. I remember Star Appeal covering 55 mares one year and everyone was up in arms. So the increase in book sizes have been a big change.

It’s been a privilege to look after the Thompson horses. Mr Thompson was an amazing man. I had cancer when I was 32 and the first thing he said to me was ‘we’ll send you anywhere in the world for what you need’. They stuck by me and I’ve tried to repay that loyalty. They allowed me to work as much or as little as I wanted. Being with the horses made such a difference – they’re good for the soul. They kept me going. It doesn’t matter what kind of day you’ve had, you go for a walk through the paddocks, seeing a mare or foal lifts the spirits.

I’ve done my job for 40 years and it was time for me to retire. I lost a good friend last Christmas and it made us sit back and think. After the cancer, I always thought that I wouldn’t work until full retirement age as I’d been given a second chance. We’re now in the south of France and I’m learning a new language. We’ll go racing at Cagnes-Sur-Mer – and if someone needs a horse looking at, I’m here! 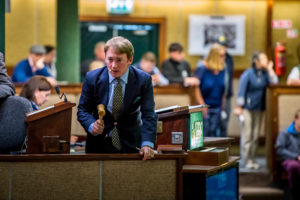 Up Next
Bernard Condren joins Goffs UK as Head of Sales