The Listed British Stallion Studs EBF Hyde Stakes (1m), a fast-track qualifier for the All-Weather Championships, is the feature on Kempton’s card today, with the field of 14 headed by Eve Johnson Houghton’s Group 1 winner Accidental Agent.

The five-year-old will be running on the all-weather for the first time since the 2017 edition of this contest when he was beaten four and a half lengths by Second Thought. He was last seen finishing third behind Roseman in the Listed Ben Marshall Stakes at Newmarket earlier this month.

His rivals include the Richard Hannon-trained War Glory, who is stepping back up to a mile after two wins over seven furlongs. Stuart Williams’ Via Serendipity is also one to watch in this race as he struck over course and distance last month.

Jumping action comes from Chepstow, Hexham and Warwick today while Dundalk in Ireland holds an all-weather fixture. There is also a nine-race card at Happy Valley in Hong Kong.

Owned by Kin Hung Kei and Qatar Racing, the daughter of Invincible Spirit was an impressive four-length winner of the Group 3 Prix Sigy at Chantilly for Francois Rohaut in April.

The three-year-old will be catalogued as Lot 1793C and offered as a horse out of training by Tweenhills Farm & Stud.

Another wildcard set to come under the hammer is the Shamardal mare Salamah, a winning sister to the Gimcrack Stakes winner Emaraaty Ana. She is offered as Lot 1793B by the Castlebridge Consignment covered by No Nay Never.

The third wildcard is the Listed-placed Exceed Loose, who finished third in the Premio Nogara at Milan for Alduino Botti and will be consigned by Old Buckenham Stud as Lot 1793A. 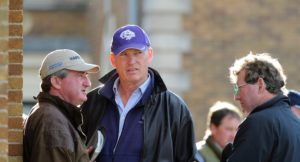