Jump racing is the order of the day in Britain as Bangor-on-Dee, Exeter and Ayr all stage National Hunt cards.

Royal Family will face 11 rivals in a bid to secure valuable black type including the Alain de Royer-Dupre-trained Jizellita, a winner at Longchamp last time out, and Charley Rossi’s Boulevard, who finished third behind Called To The Bar in the Group 3 Prix Gladiateur in September.

Prix de l’Arc de Triomphe hero Waldgeist has been retired from racing and will take up stud duties at Ballylinch Stud in Ireland for the 2020 breeding season.

The four-time Group 1 winner, owned and bred by the partnership of Gestut Ammerland and Newsells Park Stud, will stand at a debut fee of €17,500.

“As with all new Ballylinch stallions, we intend to syndicate a number of shares to leading breeders.”

The Juddmonte homebred added three more top-level wins to her name in 2019 in the Coral-Eclipse, King George VI and Queen Elizabeth Stakes and the Darley Yorkshire Oaks.

It is the second year Enable has scooped Cartier’s top award, having won in 2017, and joins Frankel and Ouija Board as the only horses to have won the accolade twice.

Enable, who remains in training next year, was also named Cartier Older Horse for 2019.

Bjorn Nielsen’s Stradivarius took home the Stayer Award for the second successive year having won the Weatherbys Hamilton Stayers Million again, as well as becoming the eighth winner of the Stayers’ Triple Crown when he won the Group 2 Doncaster Cup.

Blue Point went unbeaten in five starts in 2019, including a memorable double at Royal Ascot in the King’s Stand and Diamond Jubilee Stakes, and those performances saw him land the 2019 Cartier Sprinter Award. Godolphin’s unbeaten juvenile Pinatubo was named Cartier Two-Year-Old Colt.

The Cartier and Daily Telegraph Award of Merit for 2019 was presented to Pat Smullen, who having been diagnosed with pancreatic cancer and retired from the saddle, has thrown his efforts into aiding those suffering from the same condition. He has helped to raise over €2.5 million for Cancer Trials Ireland. 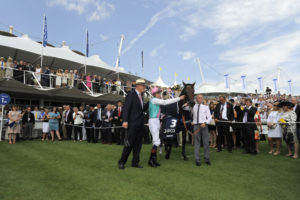 Up Next
Kingman's fee doubled