He may not have been overly impressive but Santini made a winning return to action in the Virgin Bet Future Stars Intermediate Chase at Sandown on Sunday.

Runner-up to Topofthegame in the Grade 1 RSA Insurance Novices’ Chase at the Cheltenham Festival, Santini was odds on to beat three rivals yet had to work hard to see off Now McGinty by a head in the three-mile Listed contest.

Racing for his breeders, Richard and Lizzie Kelvin Hughes, Santini will not be turning out in the King George VI Chase at Kempton on Boxing Day, as trainer Nicky Henderson feels the seven-year-old does not enjoy tight tracks.

Ten-time Grade 1 winner Apple’s Jade had to settle for second on her seasonal reappearance in the Grade 2 Lismullen Hurdle at Navan on Sunday.

Sent off at 1-4f in a race she had won for the previous two seasons, the Gordon Elliott-trained Apple’s Jade had no answer to Bacardys’ strong challenge and finished nine and a half lengths adrift of Willie Mullins’ charge, with Magic Of Light 15 lengths further back in third.

Gigginstown and Elliott may have been out of luck in the Lismullen Hurdle but Abacadabras looks a smart prospect for the team, recording an easy success in the Grade 3 For Auction Novice Hurdle.

Elliott also captured the maiden hurdle with the hugely exiting Andy Dufresne, one of three winners on the day for owner JP McManus, whose colours were also carried to victory by Ballyoisin in the Grade 2 thetote.com Fortria Chase and Fakir D’oudairies in the beginners chase.

Nicholls out of luck

The Paul Nicholls-trained Pic D’Orhy fell at the seventh in the Prix Renaud du Vivier, a Grade 1 hurdle for four-year-olds, at Auteuil on Sunday.

Victory went to the Francois Nicolle-trained L’Autonomie, a son of Blue Bresil who stormed home 18 lengths clear of Cotee Sud in the 2m3½f contest to win his fourth race in a row.

A son of Doctor Dino led the way on the opening day of the Tattersalls Ireland November NH Sale on Sunday, selling for €100,000 to Norman Williamson.

The action continues today at 10am with the sale of foals.

Top-class racemare and producer Kinnaird has died aged 18 after suffering from colic.

The daughter of Dr Devious captured the Group 1 Prix de l’Opera in 2005 for trainer Pat Haslam and later became a broodmare for Newsells Park Stud, with Group 2 victor Berkshire the best of her progeny. He is now standing at Kedrah House Stud in Co Tipperary.

Carlisle stages the Weatherbys Hamilton Graduation Chase (2m) today, worth £31,280 to the winner. The John Queally-trained Djingle, owned by the McNeill family, looks a fascinating contender, having recorded two decisive chase victories in Ireland this year.

Six go to post in the Weatherbys TBA Mares’ Handicap Chase (2m4½f) at Kempton where Skewiff looks to continue the good recent form of the Evan Williams stable.

There is also an interesting seven-race card at Fairyhouse in Ireland where Grade 1-winning hurdler Bapaume makes his debut over fences in the opening beginners chase. 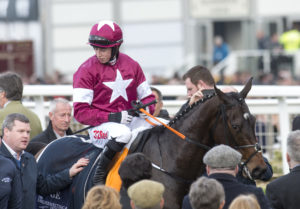