Champs’ success in the Sefton Novices’ Hurdle saw him tackle three miles for the first time so today’s trip of 2m6½f will be no issue for the seven-year-old.

His opposition includes the Jeremy Scott-trained Dashel Drasher and Dan Skelton’s Beakstown, who was beaten three lengths by Sam Spinner on his chasing debut at Wetherby earlier this month.

Awtaad remains unchanged at a fee of €15,000 for the 2020 breeding season after Derrinstown Stud revealed fees for its four-strong roster on Wednesday.

Haatef, the sire of Group 3 winners Syntax and Treaty Of Paris, will command a fee of €2,000 for the sixth year in succession while Markaz, whose first crop of two-year-olds will debut next year, has had his fee trimmed from €6,000 to €5,000.

The roster is completed by Tamayuz, sire of this year’s Lockinge Stakes hero Mustashry, who will stand at €10,000, down from the €12,500 he stood at this year.

Trained by Saeed bin Suroor for Godolphin, Thunder Snow won seven races including the Group 1 Criterium International as a juvenile and the Prix Jean Prat at three. He made history in Dubai this year when he became the first horse to win back-to-back editions of the Dubai World Cup.

Bin Suroor, speaking to the Godolphin website, said: “Thunder Snow created history by winning the Dubai World Cup twice and provided us with two brilliant results in France, capturing the Criterium International and the Prix Jean Prat. He ran great races on dirt and turf at some of the world’s top meetings and was a superstar for us.

“He was a class horse, who was very professional and easy to train. He was extremely tough and always tried his hardest in everything he did. He was one of the best horses to ever race for Godolphin and it was a privilege to train him.

“We will all miss him at Godolphin Stables but he retires at the top and we can look forward to seeing his progeny. I am sure that he will become a top stallion over the coming years.”

Stud plans for Thunder Snow will be announced at a later date.

The Tattersalls Ascot November Sale kicks off at 10.30am today with a catalogue of horses in training, point-to-pointers, yearlings and breeding stock set to go under the hammer. 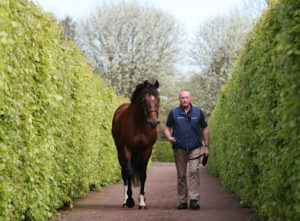 Up Next
Moment of truth