The EBF Fleur De Lys Fillies’ Stakes looks the ideal race for the John Gosden-trained She’s Got You to secure a valuable black-type win. A homebred for John and Tanya Gunther, She’s Got You is a Kingman half-sister to Group 1 winner Without Parole and was a neck second to Agincourt in the Listed Rosemary Stakes at Newmarket last month.

The opposition includes the Stuart Williams-trained Breathtaking Look, who took the Group 3 Sceptre Stakes at Doncaster last month by a length from Cheveley Park homebred Preening, who also lines up in this mile contest.

The EBF River Eden Fillies’ Stakes features a field of 14 and Godolphin’s lightly-raced Expressionism is being pitched into Listed company after an impressive maiden win at Kempton in August. Delphinia, touched off by Star Catcher in the Group 1 Fillies & Mares Stakes on Champions Day, looks set to go off a short-priced favourite.

Evening Flat meetings are also held at Kempton (aw) and Chelmsford (aw), while the jumps action comes from Stratford and Clonmel.

Twelve horses will contest the rescheduled Group 1 Vertem Futurity Stakes at Newcastle on Friday evening after declarations were revealed on Wednesday morning.

The race was due to take place at Doncaster last Saturday with six horses set to go to post, but the course had to abandon the meeting because of a waterlogged track.

Kinross, who made a striking impression when scoring by eight lengths on his debut at Newmarket earlier this month, is a fascinating contender for owner-breeder Julian Richmond-Watson, while Qatar Racing’s Kameko boasts solid stakes form, having finished runner-up in the Solario Stakes and Royal Lodge Stakes.

Aidan O’Brien sends five horses for the mile contest in the shape of Mogul, Innisfree, New World Tapestry, Royal County Down and Year Of The Tiger.

Ispolini and Marmelo out of Melbourne Cup

Racing Victoria announced the news in a statement released on Wednesday night, which said: “Stewards received a RV veterinary report advising that Marmelo would not be fit to compete in the Melbourne Cup if it was held on the day of final acceptances closing [Saturday November 2] as stated within the conditions of the race.

“Marmelo was referred to the University of Melbourne equine clinic to undergo a standing CT scan across the weekend after showing signs of soreness upon inspection by RV veterinarians.

“Having considered the RV veterinary report, in addition to veterinary reports submitted by trainer Hughie Morrison, stewards acting under AR20(d) have ordered the withdrawal of the horse from the Melbourne Cup.”

Godolphin’s Ispolini is deemed to have an issue with a cannon bone and has also been withdraw from Flemington’s famous race.

Morrison looks set to appeal the decision made by the Racing Victoria stewards. 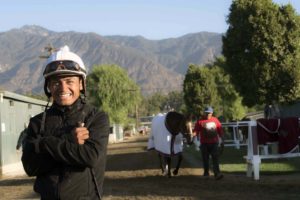 Up Next
Ready and Abel