There is an intriguing runner in Fakenham’s two-mile maiden hurdle that opens the card at the Norfolk venue with the Charlie Hills-trained High Change set to make his hurdling debut.

Hills is of course associated with brilliant sprinters Battaash and Muhaarar, and Irish 2,000 Guineas hero Phoenix Of Spain.

High Change is owned by his father, legendary former trainer Barry, and was last seen in June when taking a bumper at Ffos Las impressively by two and a half lengths despite hanging left when taking the lead.

His opponents include Falco Blitz, trained by Nicky Henderson, who is bidding to snap a run of three runner-up efforts, and the Olly Murphy-trained Timeforaspin, who is also making his debut over hurdles.

Taunton stages a jumps card today with the two-mile mares’ bumper at 4.30pm featuring the Harry Fry-trained Arctic Rose, who is a Pastorius half-sister to 2017 Cheltenham Festival winner Arctic Fire.

Betfair has unveiled a £100,000 bonus to connections of any horse that wins the two richest handicap hurdles staged in Britain during the jumps season – the Grade 3 Betfair Exchange Trophy run at Ascot in December and Newbury’s Grade 3 Betfair Hurdle held in February.

Barry Orr, Betfair spokesman, said: “We’re proud to sponsor the two biggest handicap hurdles in the calendar and, by introducing this £100,000 bonus for any horse who lands both races, we are once again confirming our commitment to excellence and outstanding achievement.”

ITV Racing presenter Ed Chamberlin has been confirmed as host for next year’s Godolphin Stud & Stable Awards, which will be held at The Underglobe in London on February 24.

Chamberlin said: “It will be a real thrill to present the awards again in 2020 and it is always one of the great nights of the year.

“Those who look after racing’s equine stars have always been an integral part of ITV Racing’s coverage, and I’ve no doubt we’ll hear more inspirational examples of their love and passion for racing in February at the awards ceremony.” 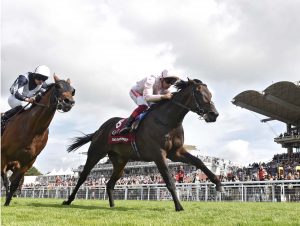 Up Next
Darley unveils 2020 fees