There was plenty of excitement on the opening day of Book 2 at the Tattersalls October Yearling Sale on Monday, with two record prices set in the ring.

Less than two hours later, lot 767, a daughter of Dark Angel, became the first yearling to break through the million-guinea mark at Book 2. Angus Gold, acting on behalf of Shadwell Estates, went to 1,050,000gns to secure the filly, whose dam Allez Alaia is a daughter of that wonderful racemare and producer Cassandra Go.

Trevor Stewart, who campaigned Cassandra Go when she was trained by Geoff Wragg, bred the record-breaking filly, sold through Ballyhimikin Stud.

Book 2 continues today at 10am and runs until Wednesday, October 16.

American Devil on the move

American Devil’s oldest runners are three this year and they include dual winner Lady Of Devil, though it is hoped he will be an attractive proposition for National Hunt mares at his new base.

Leicester will need to survive an inspection in order to stage today’s seven-race card, which includes two interesting novice contests sponsored by the EBF.

There is jump racing at Huntingdon and Hereford while Musselburgh hosts its Flat season finale.

Kempton (aw) race in the evening and there is a jumps fixture at Punchestown in Ireland. 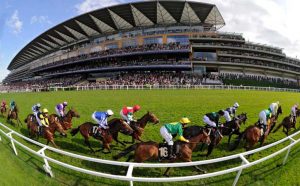