This year’s Haydock Sprint Cup hero Hello Youmzain has been bought by Haras d’Etreham and Cambridge Stud. The colt will remain in training with Kevin Ryan before taking up stud duties in 2021.

The deal to acquire the sprinter from owner Jaber Abdullah was brokered by Hubie de Burgh of Deburgh Equine. Speaking to Jour de Galop, he said: “This is a sprinter of great talent who will be even stronger at four.

“This year he proved to be a real star. We are likely to run Hello Youmzain in the QIPCO British Champions Sprint, which will be a thrilling starting point for this new association.”

Scalo to stand at Yorton

Scalo, who sired this year’s Deutsches Derby winner Laccario, will relocate from Haras de Gelos in France to Yorton Farm Stud for the 2020 breeding season.

The son of Lando will appeal to National Hunt breeders, as his sire is responsible for the talented jumps performers Air Force One, Caracciola and Fox Norton. A stud fee for Scalo will be announced at a later date.

David Futter told Racing Post Bloodstock: “We’ve secured Scalo with the help of bloodstock agent Richard Venn and are delighted that the horse is joining our roster.

“We’ve been keeping an eye on him for some time and in common with other proven horses we’ve stood, it was his stock which caught our eye first. They’re great models with wonderful temperaments and proving they perform at the top level. Not many Group 1-winning stallions breed a Group 1 winner themselves.

“From limited opportunities Scalo has had seven runners over jumps in France and three individual winners. His percentage of winners to runners is 58%.”

Fergus Sweeney to join the BHA as steward

Group 1-winning jockey Fergus Sweeney, who announced his retirement earlier this year, will join the BHA as a steward when he retires from the saddle next month.

Sweeney will undergo an extensive training programme to become a steward in December once he relinquishes his jockey’s licence.

Brant Dunshea, Chief Regulatory Officer of the BHA, said: “It’s great news that Fergus will by joining our stewarding team at what is an exciting time. I’m sure his years of experience of riding at the highest level around the world will be an invaluable addition to the stewards’ room.”

Sweeney said: “I’m excited to be starting a new career as a steward when I retire in November. Riding has given me a fantastic 25 years and I’m looking forward to being able to use that experience in my new career.”

Following the recent spell of wet weather, the BHA has announced that an additional Flat fixture will take place at Musselburgh on Tuesday, October 15.

Entries for the six-race card will close today at noon with declarations set to close at 10am on Sunday.

It’s the first day of the Dubai Future Champions Festival at Newmarket and the Group 1 Fillies’ Mile is the feature race on the card.

Nine runners will go to post for the mile contest including the highly rated Cayenne Pepper and Quadrilateral. Also in the field is Alan Spence’s West End Girl and we spoke to the owner about her chances in the race.

There is Flat racing at York, Newcastle (aw) and a jumps meeting from Chepstow. In Ireland there is an afternoon jumps card at Downpatrick and an evening meeting from Dundalk (aw). 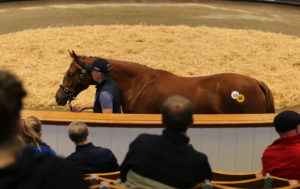