By The Owner Breeder staff 13 September 2019

The Group 2 Flying Childers Stakes (5f) headlines Doncaster’s card today with the Simon Crisford-trained A’Ali bidding to bounce back from his last time out defeat in the Prix Morny.

The son of Society Rock had looked an exciting prospect with his Group 2 wins in the Norfolk Stakes and Prix Robert Papin.

Doncaster’s card also features the Group 2 Doncaster Cup (2m2f) in which Britain’s dominant stayer, Stradivarius, bids to make it ten wins in a row for his owner-breeder Bjorn Nielsen.

The Group 3 Sceptre Stakes (7f) opens proceedings and the Roger Varian-trained Farzeen looks the most progressive runner in the 14-strong field.

Elsewhere in Britain, Chester, Sandown and Salisbury all stage Flat meetings while over in Ireland, Listowel hosts an eight-race mixed meeting.

The five-year-old, who took the Prince of Wales’s Stakes at Royal Ascot in June and was runner-up in both the King George VI and Queen Elizabeth Stakes and Juddmonte International, was on the Warren Hill polytrack canter in Newmarket when he injured himself.

Peter Stanley, spokesman for owner-breeder de Rothschild, told the Racing Post: “Crystal Ocean has had two screws inserted in a hind canon bone and has come through the surgery successfully. It should in no way affect his future stud career.”

Owner Dai Walters went to £105,000 for a son of No Risk At All at the inaugural Goffs UK Yorton Sale on Thursday.

Already named Prince Des Fichaux, the youngster is out of the French Grade 2 winner Princesse Kap and had previously made €50,000 when bought by Richard Venn at last year’s Osarus National Hunt Sale.

David Futter, owner of Yorton Farm, said: “We are delighted with today’s results, this sale has been a long time in the making and I’d like to thank the whole of the Yorton Farm team who have worked tirelessly during the last few months.

“We would also like to express our immense gratitude to the Goffs UK team, who have helped bring this concept to life and to everyone who attended today’s sale and supported this exciting new venture. We believe the Yorton Sale has a bright future and we hope this initiative will become an annual date on the National Hunt calendar.” 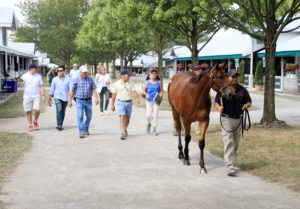