The only racing action in Britain and Ireland today comes from all-weather meetings at Southwell and Wolverhampton.

It is at the latter where a competitive handicap, worth £11,828 to the winner, will be run over six furlongs with the six-runner contest headed by the Tom Dascombe-trained Calder Prince.

The seven-year-old has finished in the frame on all three of his starts this year including when beaten only half a length into third by Ginger Fox in a 7f handicap at Lingfield earlier this month.

His biggest danger looks to be the Stuart Williams-trained Street Parade, beaten a neck by Watchable at today’s venue at the beginning of the month.

Despite a significant gamble on Leighton Aspell’s final ride in the bumper at Fontwell on Sunday, he could manage only second on the Nick Gifford-trained Itsnotwhatyouthink.

Gifford, who Aspell has ridden for a number of years, told the Racing Post: “I’m going to miss Leighton; we go back a long way and he’s a mate, not just a jockey. That horse has had such a lovely introduction to racing and that is typical of Leighton.

“He’s such a consummate horseman and I think he’s got better with age, especially young horses. The public don’t see all the work he does at home and the help he gives, bouncing ideas off each other about where to go and what the horses want.

“He’s a workaholic and a very good long-distance runner. We are going to miss him and it’s still a bit of a shock.” 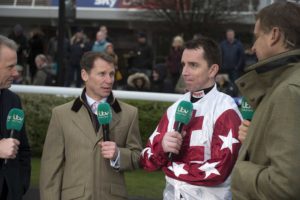