Paul Hanagan will be out of action for an extended period after taking a heavy fall at Newcastle on Saturday evening.

The two-time champion jockey was riding Requinto Dawn for trainer Richard Fahey in a six-furlong handicap when the five-year-old gelding clipped heels and came down.

Hanagan is reported to have fractured his T6 vertebra, located just below the level of the shoulder blades, and is waiting to hear whether or not he requires an operation.

Joy for McLoughlin and Maxwell

The Dermot McLoughlin-trained Captain Cj put his chasing experience to good use when recording a first success over regulation fences in the Grade 2 Ten Up Novice Chase (3m) at Navan on Sunday.

A prolific winner in point-to-points, Captain Cj recorded his only previous victory under rules in a novice hurdle at Hexham but ran well to chase home Minella Indo on his previous outing over course and distance in January.

The nine-year-old produced a good round of jumping and coped well with the heavy ground, staying on strongly under Conor Maxwell to defeat Elwood by six lengths.

Cracking Smart, trained by Gordon Elliott for Gigginstown, caused a 16-1 upset in the Grade 2 Boyne Hurdle earlier on the card. Stable companion Tiger Roll finished fifth on his first run of the season ahead of his bid for a third Randox Health Grand National victory in April.

Carlisle stages an all-hurdles card today with its chase course waterlogged following heavy rainfall in the north of England. Brian Hughes, 16 winners clear of the injured Richard Johnson at the top of the jump jockeys’ table, takes a ride in each of the six races.

There is also all-weather action at Lingfield and Kempton. 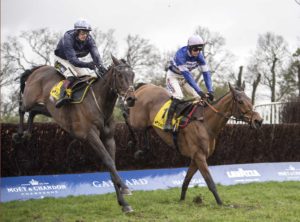