The daughter of Dubawi made her debut at this track last month, when she was beaten two lengths into third by her stablemate Endless Echoes.

Her opponents include the Godolphin homebred Beautiful Illusion, also trained by Appleby, and the Michael Bell-trained Festive Love, a homebred for Lady Bamford who was beaten only half a length on debut at Kempton earlier this month.

Plumpton’s meeting is subject to passing an 8am inspection today.

Punchestown’s Sunday meeting, which was cancelled due to the effects of Storm Ciara, will now take place on Tuesday.

Niall Cronin, Communications Manager for the Irish Horseracing Regulatory Board, said: “Punchestown’s Clerk of the Course Brendan Sheridan will check out the course in the morning and we’ll know more then.”

The four-year-old filly, who took home the Listed mares’ bumper at Market Rasen on debut last month, was bought privately by Drew out of the Willie Mullins stable.

She has now joined David Pipe and the trainer told the Racing Post: “Panic Attack is a lovely addition to the stable. Bryan spoke to me and told me he was interested in her, and I’d seen the Market Rasen race live and had been impressed with the way she had beaten some decent rivals.

“She was bought for the festival bumper, so that’s the short-term plan, but she’s a lovely horse for the longer term.” 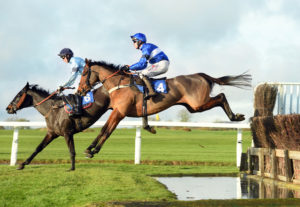