Alner took out his licence in 1993 following a spell as an amateur jockey and among the other horses he trained to big-race successes were Betfair Chase scorers Kingscliff and The Listener, as well as 2007 Welsh Grand National hero Miko De Beauchene.

Paralysed in 2007 after a car accident, Alner and his wife Sally became the first trainers granted a joint licence in Britain a year later. The pair retired from training in 2010.

Paul Nicholls was among those to pay their respects on Tuesday. In a message posted to Twitter, Nicholls said: “I would like to pay a heartfelt tribute to Robert Alner who died last night at Odstock Hospital in Salisbury.

“His achievements as a top amateur and racehorse trainer are well documented and include a Cheltenham Gold Cup with Cool Ground.

“It was Robert’s extraordinary toughness of spirit after a life-threatening car accident in November 2007 that left an indelible impression on everyone who knew him. That he survived for more than 12 years after sustaining such terrible injuries was nothing short of miraculous.

“He was confined to a wheelchair, could hardly move and needed 24-hour care for the rest of his life. But he continued to take a lively interest in everything around him. [He] followed racing closely, retained a warm sense of humour and was an inspiration to his friends, family and the doctors and nurses who looked after him on his many visits to Odstock.

“I’d see Robert from time to time at our local point-to-points, invariably in good form, holding court from his wheelchair in the back of his specially converted vehicle.

“Frankly he was a marvel. What an amazing man.”

Alner is survived by Sally and their daughters, Jennifer and Louise.

Gelboe De Chanay will look to atone for her last flight fall on her British debut at Fontwell in December when she contests the fillies’ juvenile hurdle (1m7f) at Ludlow today.

The four-year-old daughter of Rail Link, trained by Philip Hobbs for JP McManus, will face seven rivals including the Dan Skelton-trained Gilka, who makes her debut in this country having won a bumper in France for Christophe Lotoux.

All-weather racing is staged at Southwell and Wolverhampton today. 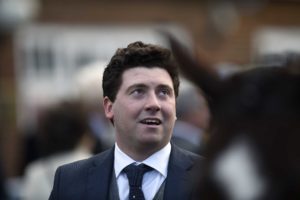