Outstanding mare Honeysuckle extended her unbeaten record over hurdles to seven races when recording a battling success in the Irish Champion Hurdle at Leopardstown on Saturday, one of four Grade 1 races staged on the first day of the Dublin Racing Festival.

Trained by Henry de Bromhead for Kenny Alexander, Honeysuckle was far from foot perfect at some of her obstacles under Rachael Blackmore, yet still had enough left in the tank at the end of the two-mile contest to see off outsider Darver Star by half a length.

It was a superb afternoon for De Bromhead and Blackmore, who struck earlier on the card with Notebook in the Grade 1 ERSG Arkle Novice Chase. The Gigginstown-owned seven-year-old was strongly pressed by Cash Back after the final fence but stayed on well to prevail by three quarters of a length.

Trainer Paul Nolan has a top-class performer on his hands in the shape of the Toberona Partnership’s Latest Exhibition, a decisive winner of the Grade 1 novice hurdle under Bryan Cooper, while the Willie Mullins-trained Chacun Pour Soi outpointed stable companion Min in the Grade 1 Dublin Chase to give owner Rich Ricci a one-two in the 2m1f contest.

Sheehan always looked confident in the 2m4f event on the six-year-old, owned by Kate and Andrew Brooks who were also tasting top-level success for the first time, while favourite Laurina looked in trouble a long way from home, eventually pulling up.

Itchy Feet powered away from Midnight Shadow after the last fence and scored by three and a half lengths, with Champagne Platinum 15 lengths further back in third.

There are four Grade 1 races at Leopardstown today headed by the Irish Gold Cup at 3.30pm. Nine runners go to post for the three-mile contest including Delta Work, winner of the Lexus Chase over course and distance in December, and Kemboy, successful twice at the top level last season.

A good card at Musselburgh has attracted some of the top southern stables. The Paul Nicholls-trained Thyme White, owned by The Stewart Family, bids for his first hurdles win after two seconds in the Listed Scottish Triumph Hurdle (1m7½f).

The nine-year-old carries top weight of 11st 12lb against six rivals, with the Lucinda Russell-trained Order Of Thistle looking a likely danger at the foot of the handicap under 5lb conditional Thomas Willmott. 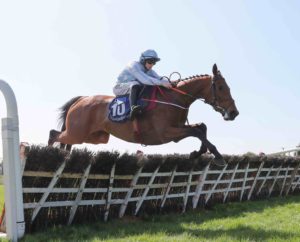