By The Owner Breeder staff 03 September 2019

Goodwood, Catterick and Salisbury (twilight) stage the turf action today while Kempton races on the all-weather this evening.

The Paul Cole-trained Celtic Art, runner-up to Molatham in the British Stallion Studs EBF Convivial Maiden Stakes at York, is a short price to bag the £15,753 first prize for owners Jim and Fitri Hay, though Andrew Balding’s representative Montanari, owned by Mick and Janice Mariscotti, should surpass his debut effort, which came in the Chesham Stakes at Royal Ascot.

Sire sensation Kingman is responsible for a runner in each of the six-furlong novice contests on Salisbury’s card, the Hamdan Al Maktoum duo Raaeq (5.25pm) and Areehaa (6pm), while his gelded three-year-old son Imhotep, a half-brother to Group 3 scorer Fair Eva, makes his debut in Kempton’s six-furlong novice event (6.15pm).

Danny Tudhope takes four rides at Catterick – three for boss David O’Meara – as he tries to erode Oisin Murphy’s lead in the jockeys’ championship. Murphy rode a double at Chepstow on Monday to increase his advantage to 19.

Pour La Victoire claimed the record as the most successful horse ever to race at Brighton after notching his tenth win at the seaside track yesterday in the Dave Wood 60th Birthday Handicap (7f).

The nine-year-old gelding, trained by Tony Carroll, clearly loves the sea air and came from the off the pace to record victory number ten under Hollie Doyle, who is enjoying the best season of her career to date.

Fellow nine-year-old Roy Rocket was also searching for his tenth Brighton win but the popular grey could finish only fifth in the 1m4 handicap.

The new jumps season is on the horizon and Grand National-winning trainer Dr Richard Newland is moving to a new stable with a larger capacity.

Still based in Worcestershire, Newland’s upgraded facilities include 40 boxes and a top-of-the-range six-furlong gallop.

Pineau De Re gave the GP his biggest moment to date as a trainer when taking the 2014 Grand National under Leighton Aspell. 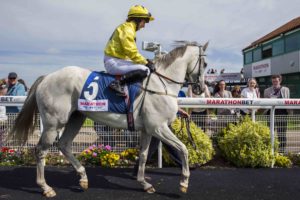