Martyn Meade will take the wraps off three-year-old Opportunist, a Cape Cross half-brother to top-level winners Brando and Ticker Tape, in the Betway Novice Stakes (1m2f) on the all-weather at Lingfield today.

Bred by Car Colston Hall Stud out of the Silver Hawk mare Argent Du Bois, Opportunist will race in the colours of Manton Park Racing having been purchased by Dermot Farrington for 50,000 guineas at Book 2 of the Tattersalls October Yearling Sale in 2017.

His opponents include the John Gosden-trained Merry Vale, who has finished placed on both her starts this season, and the Sir Michael Stoute-trained Dubious Affair, bidding to break her maiden at the ninth time of asking.

At Kempton, the Charlie Appleby-trained juvenile Eastern World makes his debut in the British Stallion Studs EBF Novice Stakes (1m). The son of Dubawi is a half-brother to Godolphin’s star performer Thunder Snow, dual winner of the Dubai World Cup who retired with career earnings of £12.6 million.

Chelmsford also stages an all-weather fixture today while Hexham hosts its final jumps meeting of 2019, subject to a precautionary inspection at 8am. Leicester’s six-race jumps card must pass an 8am inspection.

Trainer Tom George announced on Tuesday that stable stalwart God’s Own has been retired from racing.

Owned by the Crossed Fingers Partnership, God’s Own captured the Grade 1 Melling Chase at Aintree in 2016. He also won the Grade 1 Ryanair Novice Chase and the Grade 1 Champion Chase at Punchestown.

Writing on his website, George said: “With the recent wet weather meaning he’s unlikely to get his favoured good ground this winter, it would not be fair to ask him to take on the younger generations with conditions against him.

“It’s been a pleasure to have Basil [God’s Own] at Down Farm to more than seven years and we’re delighted he’s been found the best home for his retirement.

“He will spend the rest of winter here at Down Farm before going off to live with his regular work rider Sherrie-Anne Derrick.”

Three-time Group 1 winner Notnowcato has died at the age of 17 after suffering a heart attack while covering a mare at Knockhouse Stud in Ireland.

Sean Kinsella of Knockhouse Stud told the Racing Post: “He had been hale and hearty and had shown no signs of illness while here, but he just dropped dead in the breeding shed.

“He was a lovely horse to deal with, with a great attitude, and from what we have seen of his young stock they have inherited those attributes. It’s a real pity to have lost him at such a relatively young age.” 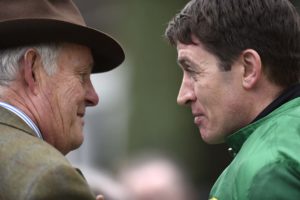