The Bolster bows out

Argento Chase hero The Giant Bolster has been has been retired at the age of 11, with connections feeling the time was right.

The son of Black Sam Bellamy had been a standout performer for David Bridgwater’s yard, over the past six years.

His first win came in a novices’ hurdle at Market Rasen in November 2009, when he was ridden by former jump jockey Rodi Greene.

As a six-year-old, his first of three successes at Cheltenham came in a handicap chase at the Festival Trials meeting.

A quirky character at times, The Giant Bolster went on to win a further two times at Prestbury Park, his most recent being his finest, a seven-length victory in the Grade 2 Argento Chase in January 2014.

However his career highlights came in both the 2012 and 2014 Cheltenham Gold Cup’s, where he finished second and third respectively under Tom Scudamore.

The second of those turned to be one of the most open in memory. The gelding went down to the Jim Culloty-trained Lord Windermere by only three-quarters-of-a-length, in a blanket finish to jump racing’s most prestigious prize.

“He was probably a ‘nearly’ horse to everyone else, but to us he wasn’t. With luck in running, he could have won two Gold Cups,” reflected Bridgwater.

He added: “Had he done that, I suppose he would have been considered as one of the greats, but there is no question he has been our flagship horse for many years. He’s given us some unbelievable days. It is like anything else, you will miss it when it isn’t there.”

Rated 164 in his prime, The Giant Bolster has certainly been a racing fans favourite. He has given owners Simon Hunt and Gary Lambton a lot of days in the sun, earning just shy of £373,000 in prize money during a 40-race career.

One of Wyck Hill Farm’s biggest supporters, Hunt’s familiar checked silks will still be major presence in the Bridgwater set up. The likes of Lakeshore Lad and Mahlers Star are just two of his younger horses in training in the beautiful Cotswold surroundings.

Hunt said: “The Giant Bolster has taken us to the pinnacle of National Hunt racing and realised big days we could only dream about.”

“I cannot thank David Bridgwater and the team enough – that lad has turned himself inside out for our horse.” 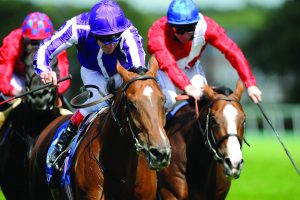 Up Next
Proven Nelson makes switch