The best by Farhh

We may only have seen Farhh race 10 times in four seasons but he left a lasting impression when signing off with a rousing victory in the QIPCO Champion Stakes. His memorable neck victory was at the expense of the tough French veteran Cirrus Des Aigles, who was chased home by the Derby winner Ruler Of The World, with the rest of the field six lengths adrift of the leading trio.

The good-looking son of Pivotal raced only once in each of his two- and three-year-old seasons, winning on both occasions before making his four-year-old debut in the Thirsk Hunt Cup with a weighty reputation already behind him despite his infrequent appearances.

The Godophin team was clearly right to keep this talented individual in training through a stop-start career dogged by soundness issues. His subsequent five runs at four saw him finish runner-up four times at the highest level – to Nathaniel, Moonlight Cloud and twice to Frankel – and throughout his career he never finished out of the first three, including seven starts in Group 1 company.

With two of that trio retired to stud, Farhh was able to rule the roost on his return to the track at five in the Lockinge Stakes, and despite not having been seen in public between that race in May and Champions’ Day in mid-October, his ultimate run was arguably his finest yet, as he dug deep to fight off the battle-hardened Cirrus Des Aigles, a former winner of the Champion Stakes and second last year to Frankel.

Farhh has every right to be good: his sire Pivotal has been one of the modern-day success stories of the British stallion ranks, his Group 1-winning offspring including Oaks winner Sariska, Excellent Art, Immortal Verse, Siyouni, Falco and his fellow Cheveley Park Stud stallion Kyllachy. Farhh’s dam Gonbarda, a German-bred daughter of Lando, won two Group 1 races in Germany before being bought in training by Sheikh Mohammed from her breeder Gestüt Auenquelle. Farhh is her first foal and his full-brother Welcome Gift also won for Godolphin at two but has not run since his juvenile season in 2011.

Like Frankel last year, Farhh was seen for the last time on the racecourse at QIPCO British Champions’ Day, as was the 2,000 Guineas winner Dawn Approach, who will also be joining the Darley roster. Farhh will stand across the road from his sire Pivotal at Darley’s Dalham Hall Stud, alongside Dawn Approach’s sire New Approach, while Dawn Approach will return to Ireland, where he was bred by Jim Bolger, to take up duties at Kildangan Stud along with fellow recent retiree, Reckless Abandon. 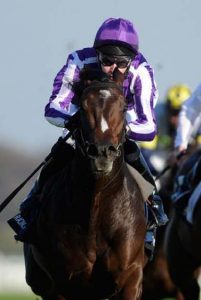