William Haggas is to train the Tattersalls Guineas Breeze-up sale-topper for an as yet undisclosed owner after the Teofilo half-brother to Group 1 winner Caradak was knocked down to Blandford Bloodstock for 110,000gns.

The Clenagh Castle Stud-consigned colt was one of four to reach the six-figure mark at Newmarket’s secondary two-year-old auction on Friday. Selling for the second-best price of 105,000gns was a Dubawi colt, who went the way of prominent Hong Kong owner Ronald Arculli but will also be trained in Newmarket.

“This is a bit of Red Cadeaux reinvestment,” said agent Charlie Gordon-Watson, who signed for the colt and confirmed he is to join Ed Dunlop’s La Grange Stables, from which Arculli’s Hong Kong Vase winner and Dubai World Cup runner-up Red Cadeaux has amassed a prize-money tally in excess of £3 million. “Every time he runs Mr Arculli buys another horse and he’s now bought two by Dubawi this year.”

The German-bred son of Dubawi is out of the Groom Dancer mare Late Night from the family of German champion Lando and had been bought as a yearling in Baden-Baden last August for €32,000. He was prepared for the breeze-up by Tony and Roger O’Callaghan’s Tally-Ho Stud.

David Redvers secured what he believed to be “by far and away the stand-out horse here” and anyone who witnessed the relaxed and impressive manner with which the Pivotal colt out of the Cheveley Park Stud mare Abandon performed in his breeze would struggle to argue with that assessment. Powerstown Stud’s offering, who had originally been bought from the October Sale for 48,000gns, increased in value to 100,000gns.

“He would have made twice that amount if he’d been in the Craven Sale a fortnight ago,” said Redvers of the relative of Caulfield Cup winner Tawqeet. “This sale always throws up some nice horses though.”

Having bought the top lot at last year’s Guineas Breeze-up Sale, Redvers and his principal owner Sheikh Fahad Al-Thani can look forward to that son of Shamardal, now named Robot Boy, performing at the Rowley Mile on Saturday as the Al-Thani-sponsored QIPCO British Champions’ Series gets underway with the Guineas meeting.

A horses-in-training session which contained 37 lots after withdrawals yielded a top price of 85,000gns for the Marco Botti-trained dual winner Kingsdesire. The son of King’s Best had failed to sell in the ring but was later the subject of a private transaction, with Italian agent Alberto Panetta securing the four-year-old on behalf of Australian interests.

Knocked down in the ring for 80,000gns earlier in the session was Line Of Reason, a handsome three-year-old son of Kheleyf, who was bought by trainer Paul Midgley for owner Andy Turner. The colt has never been out of the first two in four starts for David Simcock.

“He’s the nicest horse here and hopefully there’s a decent prize in him,” said Midgley. “He could be a horse for York. He looks progressive and hopefully he’s better than his handicap mark.” 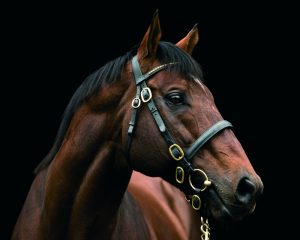 Up Next
Bertolini dies at 17