Bordeaux-based sales house will receive backing from the Newmarket team

Tattersalls, Europe’s most successful sales house, has established an alliance with fledgling company Osarus, based in the south-west of France.

The arrangement will see Tattersalls provide logistical and personnel support to Osarus, which held four sales this year at three different racecourses. As well as administrative and financial support, Tattersalls’ Newmarket team will assist with yearling inspections and auctioneering.

In 2012, Osarus has enjoyed its most successful year in the company’s four-year history. In addition to its September Yearling Sale at La Teste de Buch, it held a breeze-up sale in April at Pornichet and a second yearling sale followed by a breeding stock sale at Le Lion d’Angers earlier this month.

“This new alliance is an exciting venture for both Tattersalls and Osarus,” said Edmond Mahony, Chairman of Tattersalls. “We have been closely observing the progress and development of Osarus for a while now and have been enormously impressed with the way in which the team has established a niche in the French market in a relatively short space of time.

“Osarus is a French company working hard for French breeders and we hope that our new arrangement will allow them to continue to develop and build upon the success that they have worked so hard to achieve in recent years.

“Our involvement with Osarus also reflects the importance that Tattersalls has always placed on building and strengthening relationships in key markets around the world. The French racing and breeding industry is well structured and well funded and the close ties between Tattersalls and Osarus emphasise the high regard in which we hold both Osarus and the wider French industry.”

Emanuelle Viaud, Managing Director of Osarus, which was founded in 2008, added: “This is a very significant moment in the continuing development of Osarus. The strategic alliance between ourselves and the leading bloodstock auctioneers in Europe is a huge endorsement for Osarus and for the French bloodstock industry. We are a young, ambitious team with a vision based on our confidence in the French breeding industry and we are delighted that Tattersalls shares our vision.” 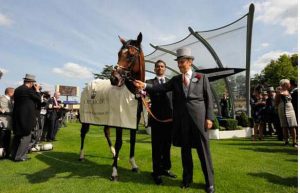 Up Next
Frankel dominates the Cartier Awards