Ian Renton is back where he started, replacing the man who trained him, Edward Gillespie, at Cheltenham Racecourse

You came to Cheltenham in 1985 as a 26-year-old trainee racecourse manager under Edward Gillespie. What brought you to the home of jump racing?

I had always wanted a career in racing from my schooldays, when I used to make the trip from Shrewsbury to the Festival each year, more often than not on Champion Hurdle day.

When I saw the job at Cheltenham advertised I realised it was a fantastic opportunity to become involved and was lucky enough to be taken on and spend three years working with Edward. It was a wonderful training.

What had you been doing and was your family involved in the sport?

I had been running wine bars in the City, which was a lot of fun. My grandfather was Bobby Renton, who trained Freebooter to win the Grand National in 1950, and before he retired at the age of 84 my early childhood memories were of him having Red Rum for a couple of years at his Oxclose stables near Ripon.

In addition to being in charge at Wincanton and Salisbury you had a spell as clerk of the course at Aintree. How much pressure was that, particularly on Grand National day?

I joined the Grand National team after the false start in 1993 so the media spotlight was certainly focused on Aintree. It was a fantastic experience working alongside Charles Barnett and we tried to cover every possible eventuality that could potentially disrupt the Grand National and ensure it didn’t happen.

Probably my most memorable moment was the year of the bomb scare in 1997, when we had 48 hours to restage the race in very testing conditions with all the heightened security levels.

So, as you can imagine, it was a moment of great pride for all of us when the tapes went up for the National on the Monday.

During my eights years at Aintree you always felt you were in the media spotlight, but it was a thoroughly enjoyable experience.

How will you dovetail responsibilities as the Jockey Club’s Regional Director of the South West, which includes overseeing Exeter, Wincanton and Warwick, with the job of managing the greatest jumps track in the world?

In my career to date I have always been extremely lucky to be surrounded by an excellent team of colleagues.

And I think the restructuring of Jockey Club Racecourses will give us an opportunity to build a regional team with Cheltenham and south west racecourses working together to their mutual benefit. I see it very much as a team effort.

Opportunities like the role I’ve just taken on come along extremely rarely. How often are you offered the chance to manage ‘the greatest jumps track in the world’, as you describe it, as well as overseeing Exeter, Warwick and Wincanton?

Additionally, the next major project to be carried out by the Jockey Club is now confirmed as the next phase of development at Cheltenham and this gives us a fantastic opportunity to further improve the raceday experience.

I have always loved Cheltenham. When I left after the 1988 Festival, Edward said that maybe one day I’d return and take over from him. I hadn’t anticipated waiting almost 25 years for that day!

What do you consider your greatest achievement during your 11 years at Arena Leisure?

I was proud of building up an extremely effective team at Arena, operating approximately 350 racedays, bringing in-house our own starting stall teams, camera patrol and catering operations.

But probably the most satisfying achievement was the redevelopment of Doncaster and, in conjunction with Ladbrokes, the rejuvenation of the St Leger.

It was a shame we didn’t see the Triple Crown won this year, though in reality I don’t think we ever anticipated getting so close.

You are filling the very big boots of Edward Gillespie, who has been in charge at Cheltenham for 32 years. Does this make you apprehensive?

It is never going to be easy following in the footsteps of Edward, who has run Cheltenham so effectively over so many years and been responsible for numerous innovations.

I’m really excited taking on this new role and look forward to the challenge of trying to improve on Edward’s legacy, and trying to provide further improvement for racegoers, owners, trainers, jockeys and stable staff.

There’s more scrutiny on racehorse safety than ever before. Is there a danger constant tinkering/changes to fences and drops etc. will damage the fabric of the sport, especially at somewhere like Cheltenham?

Safety of the participants at Cheltenham is always our number one priority. In recent years that has been demonstrated by the re-siting of fences, levelling of landing areas.

Wherever it is justified we are prepared to make significant changes to reduce the manageable risk.

However, I think you’d be hard pressed to find anyone who thinks these changes have altered the spectacle or the competitiveness of racing at Cheltenham.

This role will be more high profile and visible than anything you’ve done before. How does that sit with you?

I have spent 30 years in racing in fairly senior jobs and I am very comfortable with the new role. Naturally, I understand there will be a degree of focus on me initially, but I think that fails to recognise that many permanent and part-time staff all contribute to the fantastic experience that is Cheltenham.

In reality, it’s the brilliant racing, amazing atmosphere and the sense of history that creates the profile, not the person in charge.

What do you envisage as the most important role in your new job?

It will be ensuring all that is best at Cheltenham and the south west in terms of racing and atmosphere remains undiminished, yet at the same time bringing in enhancements to the customer experience.

Also Cheltenham’s new development when it goes ahead will be a huge step forward in improving facilities. I will feel I’ve achieved some success if in years to come the service and facilities experienced by racegoers is on a par with the quality of racing.

Talking of redevelopment, will you be directly involved in this project?

I would expect to play a very major role in ensuring that new development is what is needed for Cheltenham.

The stand would complete the final part of the new development replacing the lower end of the racecourse. It will stand alone, but it will basically be a continuation of the present stand.

There has been speculation about Cheltenham Town Football Club relocating to the racecourse. Is this really likely to happen?

The relocation of Cheltenham Town FC does not feature in the redevelopment plan currently under consideration.

However, that does not mean it cannot be considered again at a future date. I think I’ll be spending more of my time on racing matters, rather than football.

Where do you stand over the controversial issue of adding a fifth day to the Festival when some of Cheltenham’s most loyal supporters want to revert to three days?

I certainly couldn’t see a fifth day being on the agenda for some considerable time. As things currently stand I would not be in favour of a fifth day and it is a long way from coming back into serious consideration again.

Cheltenham is jump racing’s shop window, the biggest show in town. What changes/improvements would you like to make, in the short or long term?

The priority will be trying to improve the racing experience on the back of the new development. When we have crowds in excess of 60,000 at the Festival they are not as comfortable as we would like and that is certainly where my mind is focused.

We want to maintain the crowds but provide more comfort and that will be done on the back of the new development.

You’ve been a non-executive director of the BHA, RCA, At The Races and British Champion Series. What does this background give you in your new role?

My involvement in varying roles at the heart of the racing industry has given me a broad understanding of the requirements of all racing’s constituents and I believe this to be extremely valuable in my new position.

I would like to provide the best possible experience for racegoers and racing professionals, as well as ensuring that revenues from all sources can be maximised.

We’ve lost two racecourses this year in Folkestone and Hereford. In your opinion – and few would be in a better position to talk on this subject – are there too many tracks in Britain?

I don’t believe there are. Having the number of racecourses enables us to race on turf throughout the year and ensure we provide the quality of turf expected of racing in Britain.

A further loss of racecourses would reduce the ability to provide the excellent racing surfaces we are renowned for. Of course, the lesser Flat meetings can be picked up on the all-weather but this does not apply with jumping.

With regard to British Champions Series Ltd, there are plans to look at jump racing. Are you for or against the introduction of a more identifiable series of qualifying races for the Festival?

I am very much in favour of increasing the recognition of the lead up to Cheltenham and beyond. The build-up races in jumping almost identify themselves better than they have done on the Flat. Further clarification, improving the narrative through the season, would be great for jumping.

We’ve seen Greatwood and Christie’s pull out of their Cheltenham sponsorships. Is it becoming increasingly difficult to find financial support for the sport?

We are fortunate at Cheltenham to have strong relationships with many major brands, some of which have been with us for up to 30 years.

Attracting new investment at the moment is not easy but our sponsorship team does a great job, as exemplified by the recent announcement of the extension of Betfred’s support for the Cheltenham Gold Cup.

The team has introduced a concept, ‘On The Road To Cheltenham’, where one company sponsors lead-up races in addition to the major race at the Festival.

This has been successfully followed by leading brands such as Neptune Investment Management, JCB, Stan James, Sportingbet, Pertemps and OLBG.com.

Have you ever been a racehorse owner and how conscious are you of a decline in ownership numbers?

I am very conscious of the huge pressures on racehorse ownership brought by reduced levels of prize-money combined with the present economy. As an industry we must do all we can to encourage members of the public to own racehorses and I look forward to working closely with the Racehorse Owners Association to see where south west racecourses can assist.

I very much look forward to joining the ranks of owners when I have time to enjoy the full benefits of owning a racehorse or a share in one. Sadly, I have never had one before.

If you could make one change overnight to improve British racing, what would it be?

I would move forward from the current levy system to ensure that all betting revenues through new technologies from on-shore and offshore are contributing to the financing of racing in the UK.

We need to introduce medium to long-term certainty around the funding mechanism so that an internationally competitive prize-money fund can be introduced to ensure that Britain continues to provide the best horseracing in the world. 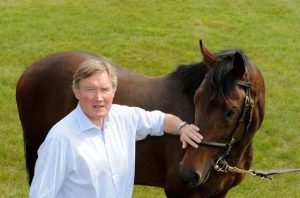 Up Next
Prize-money remains the greatest concern