A coroner’s inquest has revealed that three-time Derby winning rider, Walter Swinburn, had died as a result of a tragic fall 12 feet from his bathroom window in Belgravia, Central London.

The 55-year-old – best known for partnering Shergar to an emphatic success in the 1981 Epsom Derby at just the age of 19 – had suffered fatal head injuries from the fall which ultimately caused the death.

Although it was not possible to establish from the evidence, it is believed that Swinburn may have had an epileptic fit which contributed to the accident.

It was known that his epilepsy had become commonplace following a racecourse incident in Hong Kong in 1996 which almost killed him.

Coroner Shirley Radcliffe delivered the verdict finding that Swinburn had died as a result of an accident on December 12 last year.

A coroner’s officer said: “She confirmed that he had fallen from his bathroom window. The drop was estimated at about 12 feet, and it was into a courtyard.

“It was confirmed that Mr Swinburn suffered from epilepsy, but whether or not he had an epileptic fit which caused him to fall, was not possible to determine.”

Aside from three Derby’s, Swinburn rode high-class winners all around the world, including a Breeders’ Cup Turf success in 1996 aboard the Sir Michael Stoute-trained Pilsudski.

After retiring from the saddle at the turn of the millenium, Swiburn entered the training ranks taking over from his father-in-law Peter Harris.

It was a tragic, tragic accident

From his Hertfordshire base he sent out over 260 winners, winning four Group 3 races with Stotsfold and also landing the Royal Hunt Cup at Royal Ascot.

He handed in his licence at the end of October 2011.

“We couldn’t believe it. We would love to thank all the people for their kindness. Racing is a very close community and the response was amazing, certainly one we weren’t expecting.” 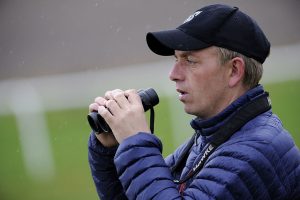 Up Next
Sidney Banks falls to Keeper Hill