Survival of the fittest

It’s a relaxed Luca Cumani who sits in his living room contemplating life without the patronage of owner Sheikh Mohammed Obaid Al Maktoum. He may have lost some horses but he certainly hasn’t lost his touch.

Cumani remains very much ‘Open for Business’, the advertising slogan he used in response to losing 35 of the sheikh’s horses towards the end of last season. The advert portrayed Cumani and his wife, Sara, standing side by side at their Bedford House Stables, in Newmarket. Both of them bore a facial gesture of welcome.

It would have been silly to try and sell myself as a two-year-old trainer; the public would have laughed

If there was one saving grace it was the timing of the spilt, which entered the public domain just before the start of the October Yearling Sales at Tattersalls. The sales season in Newmarket amounts to a gathering of the great and the good, but the Cumanis did not hide.

They couldn’t; they had yearlings from their own Fittocks Stud to sell. But they mingled and chatted and fronted up to the unwelcome development with a sangfroid that struck a chord. When the sales were over they found they had engendered plenty of support.

When faced with a crisis, it has become a cliché in contemporary vernacular to turn negatives into positives. It’s the lingua franca of young Chief Executives who’ve just been fired with seven-figure payoffs as they seek another opportunity. But it’s not so easy to achieve in the twilight of a professional life.

At 67, Cumani should be reminiscing fondly on his two Derby winners, on Barathea’s brilliant defeat of Lure when the American champion was bidding for a third successive Breeders’ Cup Mile in 1994, or even of the five Group 1 triumphs he cajoled from Falbrav in 2003 (he still swears it should have been seven). Instead he has had to pick himself up from the floor and start again.

One year on and the job is already half-done. The communal wave of sympathy for a trainer who had just won the King George VI and Queen Elizabeth Stakes with Postponed extended to more than verbal commiserations. Cumani’s existing owners combined with others new to Bedford House to send him as many yearlings as he would have received from the sheikh. They may have lacked some lustre; Sheikh Obaid owns Dubawi, after all. But the rally around Cumani fortified his confidence.

“We have been very fortunate and that leaves me feeling very hopeful,” he says. “We have now got a good spread of owners who have been very supportive and new owners have come on board. It will be business as usual next year provided we can stock up again at the next round of yearling sales in the autumn.

“We could well be back to where we’ve always been with 110-115 horses,” he continues, “whereas this year we have only about 85 in the yard. The only difficulty is that this had to be a season of transition. We managed to get enough two-year-olds to replace the ones we would have had from Sheikh Obaid, but obviously we couldn’t replace the older horses or three-year-olds.”

This depletion came from the ranks of horses with which Cumani traditionally excels. “We started the season with 24 three-year-olds, none of which had been particularly promising as two-year-olds,” he says. “We knew it was going to be tough.”

And tough it has been. “We are way down on winners because we just don’t have the numbers,” he says. “Coupled with that, the very cold spring hit my fillies hard, and there has been a bit of coughing in Newmarket to which we have not been immune.”

He has also had to contend with the setback suffered by the one three-year-old he had with clear potential. Beautiful Morning, a fair fifth behind Minding in last year’s Fillies’ Mile, threw an inflamed splint soon after she finished runner-up in a Listed race at Newbury on her seasonal reappearance in May.

None of this has outwardly affected Cumani’s equilibrium. Nor has it prompted him to recast himself as a trainer of sharp two-year-olds, which is the way the younger generation tend to make their names these days. There would surely have been no harm in him picking up half a dozen precocious types at the yearling sales last autumn.

The suggestion draws an expression of bemusement and amusement from the Italian-born Anglophile. “I’m a great believer that you should stick to what you know best,” he says.

Fair enough, although one of the first winners Cumani sent out during his debut season as a trainer in 1977 was the Windsor Castle Stakes winner, Sunny Spring. “Yes,” he replies, “but that was when I didn’t know any better. And the horse never won another race!”

This exchange says much about Cumani, who has always sailed his own boat. He brings conviction to everything he does, and he does nothing without weighing up every nuance in advance.

As much is evident in his campaigning of Mizzou this season. The five-year-old began by winning the Group 3 Sagaro Stakes, after which he returned to Ascot to chase home Order Of St George in the Gold Cup. He finished more than two lengths ahead of Sheikhzayedroad in third, who in turn had nearly three lengths in hand of Mille Et Mille in fourth.

Mizzou is thus entitled to recognition as the second-best stayer in Europe. At a time when anyone in Cumani’s position would welcome nothing more than a high-profile winner, the temptation to run Mizzou in the Goodwood Cup would have been irresistible to most – especially with Order Of St George an absentee.

The thought crossed Cumani’s mind only for as long as it took him to reject it out of hand. “Goodwood wouldn’t have suited him. Mizzou would not have appreciated the undulations and the stop-go nature of races there.

We have always sold to cover expenses. I can’t have Fittocks going broke to support Bedford House

“What he likes is a truly-run race over two miles-plus,” he continues. “For the same reason he missed the Lonsdale Stakes at York, because he wants a proper test. So we’re heading instead for the Doncaster Cup, followed by the stayers’ race on Champions Day in October.”

That precludes a tilt at the Melbourne Cup, but again, Cumani is dissuaded by the rhythms of the race. “Mizzou’s owner and I agree that the Melbourne Cup is run in three different stages: they go quick, then slow, then quick,” he says. “Mizzou ran so well in the Gold Cup because it was a true test from start to finish.”

The Melbourne Cup remains on the Cumani wish-list after he saddled Purple Moon and Bauer to finish second – the latter by a flared nostril – in consecutive years from 2007.

This high-class handicap presents the sort of challenge Cumani relishes, although he says winning the race would be more a delicious hors d’oeuvre than the main course. “I enjoy the Melbourne Cup and would love to win it,” he says, “but I’d rather win another Derby if I could, or an Arc, which I’ve never done.”

Mention of the Arc reminds that Cumani lost a great opportunity to win it when Postponed was switched to Roger Varian in September. He’d won the Prix Foy and looked cherry-ripe for the big one, yet was denied his chance.

“That’s life,” Cumani reflects. “There is no point looking back; you have to look forward. Of course it’s a challenge, but for some strange reason things go in and out of fashion.

“I think one of the most incredible stories of the last 35 years has been the challenges faced by Henry Candy. He was a Classic trainer, he trained fantastic staying horses, he had King George winners and so on, and then, all of a sudden, he fell out of favour.

“Now he has reinvented himself. Every year he comes up with a very good horse that costs very little, yet he doesn’t get the patronage he deserves. If I was a rich owner he would be at the top of my list to send horses to.”

Cumani may not be a wealthy owner but Sara and he breed horses under their Fittocks Stud banner. Their yearlings are in demand at the sales, primarily on account of the nursery’s reputation as a source of top-class winners.

Mizzou has been a stable star for the Cumani stable this season, finishing runner-up in the Gold Cup

Yet even here, Cumani resisted the temptation to take in the stud’s most appealing graduates at a time when his string could have done with a lift.

“We have always sold to cover the expenses, which is why we end up offering the best yearlings,” he says. “Of course it would be nice to keep back one or two nice colts to train, but the last thing I can afford is to keep one that doesn’t work out when I could have got, say, 300,000 guineas for it, because the covering sires of our mares would suffer.

“It’s too risky; the potential for a crash is too high. I can’t have Fittocks going broke to support Bedford House. They are two separate businesses.”

Cumani has committed Bedford House to reviving itself on its reputation alone. There is to be no help from other sources, however alluring the prospect.

But if you thought that an ill wind was blowing through the historic stable, you’d be wrong. There is no hint of defeatism in Cumani’s outlook. Horses still look out expectantly from the quad-shaped yard adjacent to his house. The place remains as immaculately maintained as it has always been, right down to the shimmering paintwork on the box doors.

The revival is already under way. 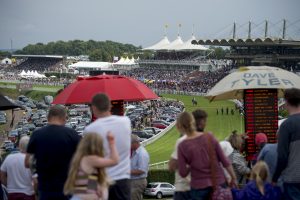 Up Next
Working towards harmony