Ireland’s leading amateur rider JT McNamara underwent surgery at Frenchay Hospital in Bristol on Friday morning after being seriously injured at the Cheltenham Festival on Thursday.

The 37-year-old fractured the C3 and C4 vertbrae in his neck when the Jonjo O’Neill-trained Galaxy Rock took a heavy fall at the first fence in the Fulke Walwyn Kim Muir Handicap Chase.

Racing was delayed as McNamara was airlifted from the course. He was said to be conscious at the time but was later placed in an induced coma as his injuries were assessed.

The Irish Turf Club’s Chief Medical Officer Dr Adrian McGoldrick has reported that he is in a “very serious but stable condition”.

Davy Russell was also taken to hospital on Thursday with a collapsed lung. The jockey, who won Wednesday’s RSA Chase on Lord Windermere, rode in the first two races on the third day of the Festival before receiving treatment at Cheltenham by Dr Sue Smith and then being transferred to Cheltenham General Hospital.

Russell was booked to ride second-favourite Sir Des Champs in the Betfred Gold Cup but has been replaced by AP McCoy after the withdrawal of Sunnyhillboy, who was declared a non-runner following a dirty scope on Friday morning. 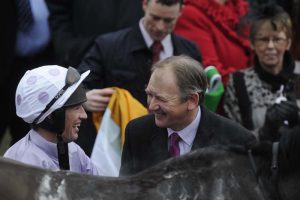 Up Next
Solwhit returns to rule the World