Keeneland January concludes with a gross of $46 million
Stories

The soft going and marathon trip of three miles and five furlongs held no fears for Eclair Surf as the eight-year-old Califet gelding galloped his rivals into submission.

Trained by Emma Lavelle for owners Dominic Burke and Tim Syder, Eclair Surf made one blunder at the 14th fence but otherwise jumped accurately under Bellamy, the pair crossing the line 13 lengths clear of favourite Gericault Roque and Tom Scudamore, with Chirico Vallis and Richie McLernon a length away in third place. 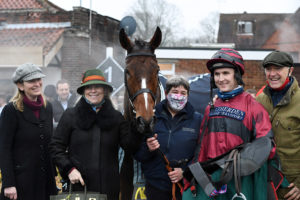 Lavelle said after the race: “First and foremost I have to say a massive thank you to Barry [Fenton, partner and assistant], who rides him every day at home. He is not straightforward and is a horse who does all of his work on his own. He tends to be keen – Barry has done an amazing job to get him here in the shape he has.

“He’s a horse that has got loads of ability and can jump brilliantly but he just has this thing of throwing in one shocker on the way round and he did it today as well. I knew that Tom wanted to get a good start and get into a good rhythm, but the horse was just so fresh and well that he was tanking along. None of us expected him to be quite as clear at that point but he got a chance to fill him up and then finish so it was brilliant.

“I think Tom rides him expecting the unexpected and I’m so touched that they’ve got such a great partnership going. Tom is a massive team player, which is great for us and for the rest of the gang at home. He comes in twice a week and when he’s riding, he’s thinking about the next time they’re going to run and the time after that, so it’s going well.

“It’s a special race and they’re proper races these, they’re not easy to win and it’s brilliant for the owners and brilliant for all the guys back at home.

“What was exciting today was he can go that gallop and stay, so I think staying trips are definitely up his street. I’m not convinced at this point he’s a National horse. I’m not saying he won’t be down the line, but he couldn’t afford to make one of those errors and get away with it at Aintree.

“I’m not ruling it out completely, but I’d say it’s one for down the line – we could look at the Scottish National as we might get softer ground this time around. Provided the handicapper doesn’t do anything too drastic there are some nice races to aim at.”

On an afternoon when front-runners were favoured, the McNeill family’s Threeunderthrufive and Adrian Heskin posted a comfortable victory in the Grade 2 Hampton Novices’ Chase (3m) to continue the excellent form of the Paul Nicholl stable, while Archie Watson, better known as a Flat trainer, enjoyed Grade 2 success courtesy of Ben and Sir Martyn Arbib’s Stag Horn in the Ballymore Leamington Novices’ Hurdle (2m5f) under Nick Scholfield.

Nicky Henderson enjoyed a superb four-timer on the Kempton card, headed by Mister Fisher’s cosy success in the Grade 2 Silviniaco Conti Chase (2m4½f). The talented eight-year-old, owned by James and Jean Potter, jumped soundly under James Bowen to defeat Eldorado Allen by a length and three-quarters. 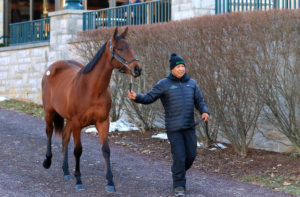 Up Next
Keeneland January concludes with a gross of $46 million