A Shamardal colt topped the Tattersalls Craven Breeze-up Sale in April and the same sire was also responsible for the Guineas Sale best-seller when David Redvers went to 115,000gns for a Mocklershill-consigned colt out of the Listed-placed Pivotal’s Princess.

Buying on behalf of Qatar Bloodstock, who also bought the top lot at the DBS Breeze-up sale, Redvers said: “He is a proper horse. The dam’s first foal is rated 96, and this chap is all speed. He did a very fast time despite the going and he was not hard ridden at all. He is a lovely type for a big horse.” 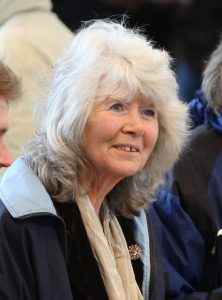 Jilly Cooper attended the sale as part of her research for her new book, which has a working title of ‘Leading Sire’

Qatar Bloodstock accounted for four of the eight top lots, including an Acclamation colt from Powerstown Stud, who sold for 87,000gns, and an 80,000gns daughter of Bernstein who had cost consignor Brown Island Stables £14,500 as a yearling.

Lot 159 a, a wild-card entry for Yeomanstown Stud who had been withdrawn from the Craven sale and retained as a yearling for 100,000gns, was this time bought by Peter Doyle for 95,000gns. The Acclamation half-brother to Masaka Stakes winner Jazz Jam will be trained by Richard Hannon for Robin and Judy Heffer, who have enjoyed plenty of success on the racecourse with Canford Cliffs and Harbour Master.

Gill Richardson waited until the last lot went through the ring before wading in with a 90,000gns bid for the Invincible Spirit half-brother to multiple American black-type earner Whatsthescript. Bred by Chris and James McHale, the Oaks Farm Stables-consigned colt is to be trained by Marco Botti.

Another colt whose sale-ring appearance was deferred from an earlier Craven date was Oak Tree Farm’s Henrythenavigator half-brother to multiple Grade 1-winning stallion Harlan’s Holiday. The $95,000 Keeneland September yearling was sold to Dermot Farrington on behalf a Hong Kong-based owner this time around for 80,000gns.

Dubai-based Ajay Anne, operating as New Approach Bloodstock, selected two from the draft of the sale’s leading vendor, Bansha House Stables, going to 75,000gns for an Invincible Spirit colt out of Remarkable Story from the family of Kayf Tara and Opera House, having previously bid 50,000gns for a Shamardal filly out of multiple winner Night Life.

A first-crop son of Tamayuz out of the Group 3 winner Sakhee’s Song was the sole offering from Rangefield Bloodstock and made 52,000gns when selling to Tom Goff of Blandford Bloodstock, while Katie Walsh’s wild-card entry, an April-foaled Kheleyf colt catalogued as lot 92a, will be trained by Richard Fahey after being knocked down to Robin O’Ryan for 46,000gns.

Horses-in-training section fails to excite
A low-key horses-in-training session preceded the sale of breeze-up horses, with Marco Botti’s four-time winner Fanunalter topping the section when selling for 67,000gns. He is set to continue racing in Bahrain having been bought by Jalil Al Mallah, who had come to the sale especially to buy the six-year-old son of Falbrav.

Cape Safari, a recent three-time winner for first-season trainer James Tate, didn’t find a buyer in the ring but was subsequently purchased privately for 37,000gns by John Stocker, while Cotton King, who has been a stable stalwart for another young trainer, Toby Coles, was bought for 20,000gns and is likely to be seen next racing for Lady Herries, who will campaign him for the Angmering Park Partnership with her sisters. 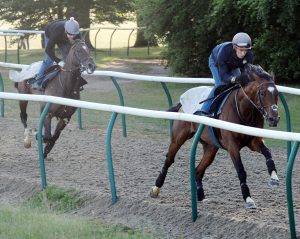 Up Next
Frankel set to gallop at Newmarket