The revival of Rahinston
Stories

Guy Henderson enjoyed a long career as a lawyer, but when the opportunity came to be Ascot’s chief executive, he took it

Having spent 30 years as an international disputes lawyer, you have now taken over the running of Ascot racecourse. It’s a very different challenge – why did you want the job and what have you learned so far?

Variety as a spice of life works for me. I enjoyed a fascinating career helping clients resolve conflict across a very wide spectrum of business, cultures and countries involving all continents of the globe. But I wanted to do something different while I still had the energy to get properly stuck in to a job that genuinely touched the senses close to my heart. If you love racing, it doesn’t get much better than Ascot.

I have learned from the inside what a fabulous venue Ascot racecourse is. My predecessor Charles Barnett assembled a top-class team and I have learned how much they have achieved in recent years to bring the business through the global financial crisis and recession. I believe racecourses are delicately balanced eco-systems. So I am spending as much time as possible in my first year listening and learning.

How are preparations going for what will be your first Royal Ascot and what are your feelings ahead of the Flat’s biggest racing festival?

Operationally, so far it has been a benign spring for preparing our facilities for Royal Ascot, which has been very helpful. Sales and bookings have been ahead of the curve from the beginning. As to my feelings, simply that electrifying combination of excitement and trepidation, which I suspect most feel as they approach a big event.

You forged your reputation as an expert communicator and mediator, finding resolutions to sometimes complex legal matters. In what way(s) can you put that experience to good use at Ascot?

I learned that in the kernel of almost every business conflict is a communication or personal relationship failure of some kind. Whatever else is going on, patient and constructive dialogue is required to find real solutions. I try to approach problems with an open mind and a willingness to take account of all perspectives.

You are on record as saying you dislike stuffiness. Royal Ascot could be described as the stuffiest of all meetings, with its clear and uncompromising dress code, especially in the Royal Enclosure. Will there be any changes in store on this front or in other areas?

What I was trying to convey was the importance of a racecourse being welcoming and inclusive. Royal Ascot is all about Flat racing at the highest level accompanied by the highest standards of elegance and tradition. I see high standards of dress as important in paying respect to the event, our traditional values, our royal heritage and the horses.

Royal Ascot is special and unique, smart, and in most areas, formal. However, I believe we genuinely offer something for everyone who wants to be involved with Royal Ascot at all levels, whether from the relaxed areas of the Heath and Silver Ring, to private boxes, fine dining restaurants or the Royal Enclosure. Huge numbers of people enjoy dressing up in the areas with no formal dress code.

How do you raise Royal Ascot’s profile further in the general sporting landscape?

Last year, Deloitte concluded that Ascot’s direct economic impact is £138 million per annum – more than the Ashes Test at Lord’s, the NFL at Wembley and the Ryder Cup when held in Wales. Strategically, I believe we increase the profile by continually working on effectively reaching out and communicating the enjoyment of following and going to the races. 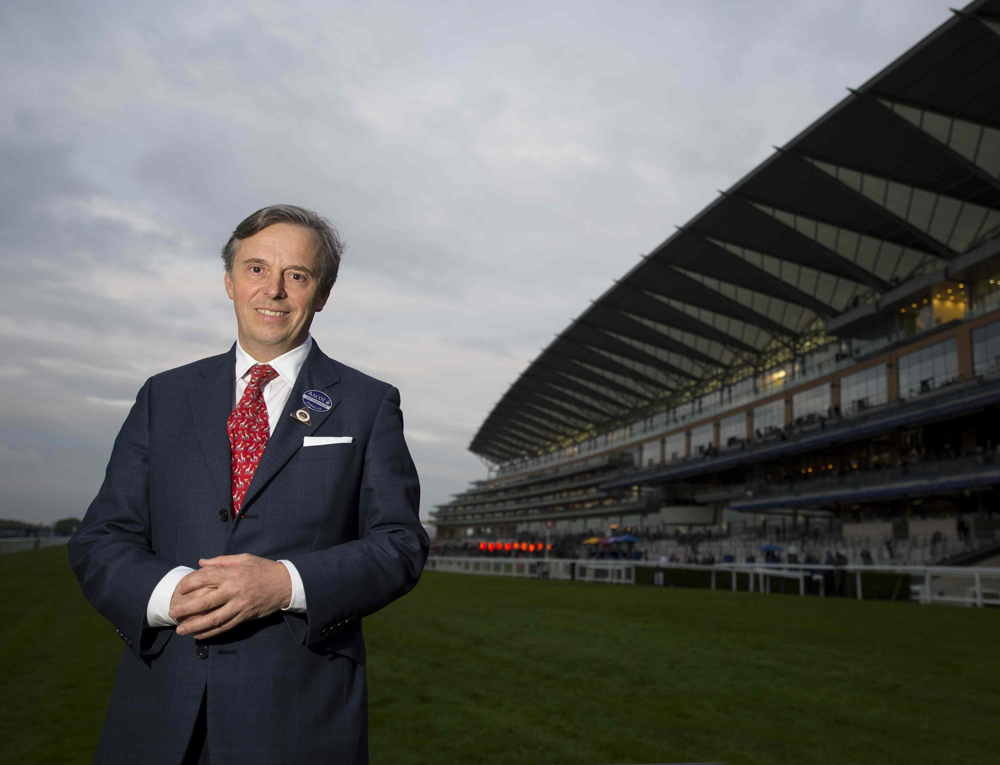 Ascot pays Nick Smith to ‘woo’ owners from around the world to run at Royal Ascot. Is this the right approach?

Without doubt it is the right thing for us. High-end bloodstock is a global business. We have a genuinely global audience – our pictures are available in 200 countries and this year, such is the interest in Australia, that Channel 7 is taking a substantial tranche of the meeting live. Think how much the world has shrunk in the last 30 years. Will this stop? I believe not. We are seeing a growing squad every year of top racehorses globe-trotting.

We want to build Ascot’s prestige as an attractive racecourse for international runners against this backdrop. It adds an important and fascinating extra dimension to the racing at Royal Ascot, our raison d’etre. It must be good for our industry as a whole. My previous career taught me that if you want to build relations internationally you have to be prepared to travel. There is no substitute for personal contact.

British Champions Day, which faced opposition at the start, is now an established fixture in the calendar. What changes or innovations could we see this year?

The big change on Champions Day this year is the promotion to Group 1 status of the sprint, meaning that we now have four Group 1s and a Group 2 on the afternoon. At the first British Champions Day in 2011 we had two Group 1s, two Group 2s and a Group 3. That’s serious progress in a short period.

You have said that British racing needs to get better at framing races for its horse population in order to produce competitive fields. What does this mean for the sport generally and for Ascot specifically?

I was quoted in the context of a specific question about National Hunt field sizes at Ascot. National Hunt fields have been in decline across the industry for a number of years, caused by a fall in the number of horses in training and an increase in the number of races. Solving this will not be easy and will take time. The more racecourses can do, working with the BHA, to frame races for the existing horse population, should help.

It is also important we respond appropriately to the TBA’s call to frame races to support the breeding of Flat stayers. Along with the TBA and the new Pattern Review Group, we have been looking specifically at the staying category. Perhaps what’s required is a Europe-wide review similar to the one that’s just been implemented for sprinters.

How did your interest in racing start and what roles have you and your family fulfilled in the sport?

My earliest memories are of Newbury. My grandmother lived on the edge of the course and we used to watch from the running rail on the back straight. I have been a racing fan ever since and first came to Royal Ascot in the late 1970s as an undergraduate.

I loved ponies from an early age but participation was constantly thwarted by allergic asthma. That was probably one reason I became involved with coxing rowing boats in my teens. I rode as a very moderate amateur in point-to-points.

As a family we have had a wonderful adventure following my son Robbie riding 100 winners as well as our own horses. We love being hands-on and have trained a few on our stock farm, resulting in 25 winners under Rules and in points. Ellerslie George’s two wins were very special. The first, as it was Robbie’s first ride against professionals, and the second because it was a Listed race in our neck of the woods.

For me, watching Minella Stars, who [my wife] Sophie and I trained, jump the second last close up in third in the Cheltenham Foxhunter was very special. Hopefully we’ll be back for another crack one day.

You will have been reminded many times that you coxed the 1978 Cambridge crew that sank in the Boat Race. What was the biggest lesson you learned from that debacle? Would you describe yourself as competitive?

Indeed. One lesson I learned was summarised by General Colin Powell in one of his 10 Golden Rules: “Never align your ego so close to your position that when your position falls your ego goes with it.” One of the many challenges with participation in the Boat Race is an emotional one. When I was involved it took up on average six hours a day, six days a week from October to race day in April.

The oarsmen train at an Olympic level of intensity that requires a dedication and single-minded focus from which it can be a struggle to move on. This taught me that, whatever the ambition, it is important to retain balance in one’s life, as with the laws of physics and nature.

When necessary I like to retreat to the natural world to help find the inspiration, through its own example, to restore the balance. The relevance of this to a racecourse is the importance of getting the balance right between all its various constituent ingredients.

For sure I am competitive. The really interesting question for each of us is how do we like to compete and how do we respond to a reverse. For it is by competing in the environment we feel most comfortable where we will do our best, whether it is as a solo artist or as part of a team. We can all look good when successful, but it is how we respond to a reverse that sorts us out.

Gigaset, a leading international communications technology company, has joined QIPCO as our most recent commercial partner and will feature at Ascot throughout the year. It is very exciting for us to be associated with a new investor in British racing.

In what other ways will you be looking to enhance commercial operations at Ascot?

In the second half of the year we will start to work together in earnest on developing our strategic plan for 2016 onwards. I aim to build a consensus with our stakeholders and my team, so it is premature to be specific.

Broadly, we shall focus on eight themes: the horses and the racing; our customers and their experience; our facilities and the estate; our partners and sponsors; our conferences and events; our communities and forces for good; our people and their development; our industry and its stakeholders.

On a sailing yacht or the top of a ski mountain, holding a glass of something nice, and reflecting that we had broadly achieved the strategic objectives we had set ourselves and dreaming where we should take Ascot for the next five years. 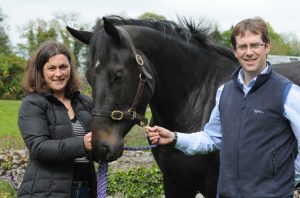 Up Next
The revival of Rahinston