When Flat racing comes in for criticism, it is usually connected to the fact that the sport’s stars are seldom around long enough to achieve the hero status often afforded the top-class jumpers.

In the staying division, however, this is not the case. Over the years, plenty of racing fans have come to worship names such as Persian Punch, Double Trigger, Yeats and Big Orange. Now, of course, we have a new star in our midst in Bjorn Nielsen’s homebred Stradivarius, whose extraordinary achievements this season have included him netting a massive bonus on top of his prize-money of more than £1.3 million by winning the inaugural Weatherbys Hamilton Stayers’ Million.

Despite the popularity of these horses among racegoers, there remains a massive disconnect in the breeding sheds and the sales rings, where staying-bred yearlings are often bought for relatively little or, worse still, marked ‘return to vendor’.

Those horses which are eventually given a chance to shine at the races and who show decent form at a mile and a half or more are often snapped up for export overseas. That’s good business for those owners selling on, often for six-figure sums, but not such good news when it comes to the increasing depletion of Britain’s staying stock.

In early 2015, the TBA issued a ‘call to action’ to the racing industry following a commissioned report which showed the British-bred staying horse to be in decline.

The then-TBA Chairman Richard Lancaster said at the time: “This research was commissioned as a result of two triggers: the European Pattern Committee downgrading the Queen’s Vase, and then the Bahrain Trophy being put on the ‘at risk’ list.

“Both deliver a worrying picture that the staying Pattern and black-type programme is under threat and, as a consequence, the stayer is in decline.”

In a heartening example of the industry working in harmony on an issue which had the potential to damage not just the racing programme but a huge chunk of the reputation on which British breeding is built, the TBA put forward a number of recommendations to the BHA, including increasing the number of maidens for the offspring of middle-distances sires as wells as 12-furlong-plus races for fillies.

The BHA swiftly took up the baton, at once initiating consultation which led to the launch of a stayers’ project the following year. This has already helped to make notable improvements to the racing opportunities for middle-distance and staying horses of varying ages and abilities.

TBA board member Philip Newton says: “We identified that there was an issue, the report confirmed all that we feared. It’s absolutely important for British racing that it has a diversity of product.

“So we took it to the BHA. They were an open door, and they were both creative and cooperative. The great thing about this is that it’s an industry initiative, not one person should be taking credit for this.

“But between us we have put the infrastructure into the racing programme that can develop and encourage the middle-distance horse.” 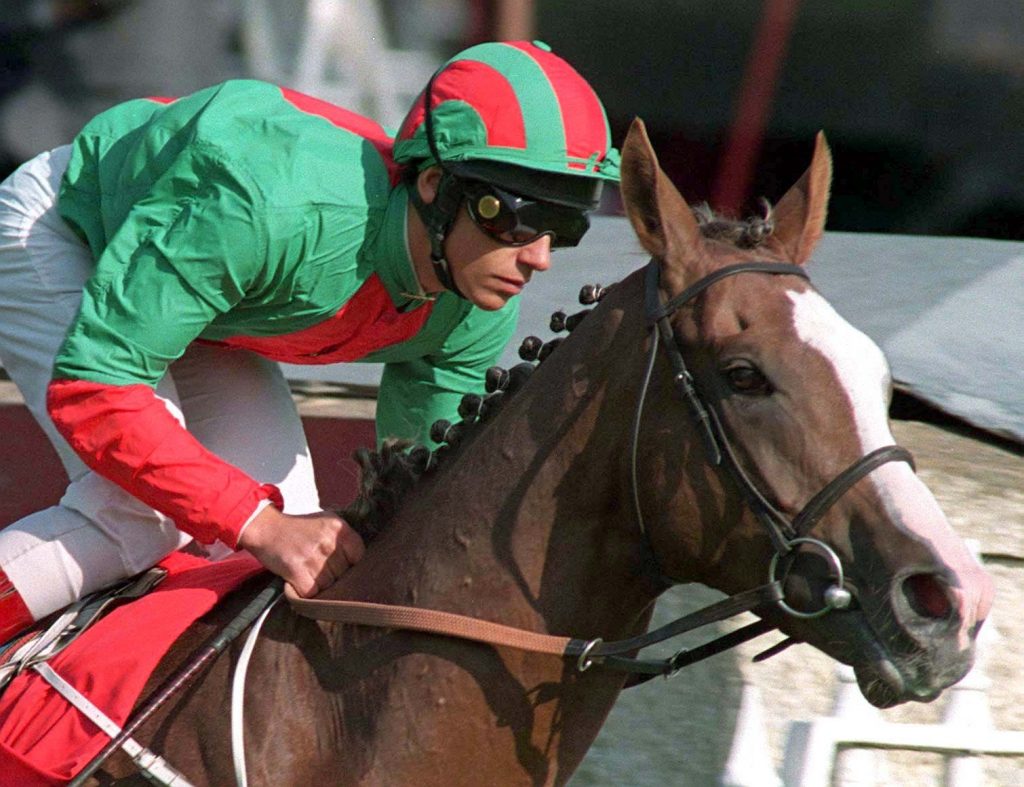 Double Trigger: prime example of a horse who had longevity and earnings aplenty

This encouragement has come on a raft of enhanced incentives for middle-distance and staying horses of varying ages and abilities. The previously demoted Queen’s Vase has now been upgraded to a Group 2, albeit the distance was shortened by two furlongs to a mile and six furlongs.

The Goodwood Cup has been a Group 1 contest for the last two seasons, while the Lillie Langtry Stakes has been upgraded to a Group 2, and the March Stakes and Silver Cup are both now Group 3 races. Furthermore, this season York launched the new Group 3 Bronte Cup, run over a mile and six furlongs for fillies and mares.

In the spring, Weatherbys Hamilton launched its Stayers’ Million series. The odd eyebrow was raised at the time as some suggested it was an almost unattainable pot of gold, but Stradivarius has very swiftly dismissed that notion, remaining spotless throughout a season which has seen him return triumphant from winning post to winner’s enclosure in the Yorkshire Cup, Gold Cup, Goodwood Cup and Lonsdale Cup.

Outside Pattern class, changes to the 2018 staying programme have included York’s historic Ebor Handicap receiving a prize-money boost to £500,000, with the intention that the race will be worth £1 million next year.

This season has also seen extra handicaps being staged at a mile and a half or more, a trial run of two one-mile-six-furlong maidens, plus a one-mille-five-furlong conditions race for three-year-olds at Newbury worth £50,000.

For juveniles, there have been extra novice and maiden races with increased prize-money for the progeny of a sire or dam who won over staying and middle-distance trips, plus an increase in the number of ten-furlong maidens. The Zetland Stakes has won back its Listed status and is now worth £40,000.

And it doesn’t end there. Between 2018 and 2020, the BHA Development Fund has pledged an investment of £1,894,500 for “races aimed at horses with stamina” alongside extra financial input from the racecourses.

“We have a commitment from racecourses to continually invest in this new programme up until at least 2020,” says Ruth Quinn, the BHA’s Director of International Racing and Racing Development.

“Obviously, this time next year or a lot earlier than that, probably late spring of 2019, we’ll start the negotiations to get a financial package in place beyond 2020.

“I had lots of meetings with trainers throughout the second half of 2016 on the back of the consultation process that I started in 2015. They’re all hugely supportive and offered lots of advice, lots of different opinions about what they would want to see in terms of race programme and alterations.

“If it looks like there is no positive change in behaviour of any shape or form two years from now, then we’ll start the process again and will be asking people, ‘Well, okay, this isn’t working. What might work instead?’

“But hopefully we won’t have to do that because I think we’ve pretty much put in place already, or are hoping to put in place very shortly, everything that everybody asked for.”

The required change in behaviour is of course multi-layered but entwined. Fundamentally, breeders need to be breeding more staying types, but many are reluctant to do so knowing how hard it can be to sell stamina-laden yearlings to a buying group with an increasing focus on speed and precocity.

How much the message is getting through to trainers and potential owners will perhaps start to be seen at the forthcoming sales, though other factors, not least a rising foal crop, lacklustre recent breeze-up returns and Brexit concerns between the core trading nations, may make this sales season shakier than the last.

The BHA and TBA have taken a long-term view on this project but will nevertheless be increasing the marketing in this area around this autumn’s sales.

That said, Quinn has been encouraged by some early findings in data from 2017 races which shows that of the horses who won black-type races over 13 furlongs or more, 90% of them ran as two-year-olds and 60% won at two.

“I think that would surprise a fair few people, though I’m very much aware that every year is different, and that data is probably going to be volatile,” she says.

Potential volatility aside, it is an encouraging snapshot that gives lie to the yearling sales moan that owners will have to wait years for this type of horse to make it to the track.

Some will, some won’t, but once the horses start racing, the statistics show that as a group they generally have greater longevity and earning potential.

“One of the messages that doesn’t get through hard enough is the residual value of the middle-distance horse,” says Newton, himself a breeder in this sector.

“It’s significantly more than the faster-bred horses. And the agents say, ‘We’ll buy this little horse, win a couple, and then we’ll sell him to Hong Kong.’ It’s all Hans Christian Anderson stuff most of the time.

“The fact that with this new programme, and the new million-pound races coming in, the Ebor and the Cesarewitch, there’s suddenly starting to become an incentive for breeding these horses and keeping them here.”

Highlighting opportunities across the scale

Newton stresses, however, that the TBA is not oblivious to the desires of the most commercial sector of the breeding industry.

He says: “Really, we just need to manage the production-line efficiently, so that we get reds, and blues, and greens, and yellows, and so that we don’t just get reds and blues.

“If we do, we’ll go the same direction that Australia has done, and that will have a limitation. We don’t want to provide bias for one or the other, but we want a sensible industry.

“That’s not to say that we’re not fully aware of the needs of members who breed commercially and want to breed fast horses. But what we do want to do is educate the owner and the trainer of the opportunities across the scale.”

Overall, Newton is encouraged by the cohesive strategy produced by various industry groups, including the British European Breeders’ Fund (BEBF), which has provided financial assistance for the sire- and dam-restricted races.

He continues: “The biggest thing and the best thing is the BHA, the industry collectively, have recognised that this is an investment for the next five, ten, 15 years, and that we’re not going to change behaviour immediately.

“We have to be prepared to accept disappointment in terms of field sizes sometimes, or sometimes a significant amount of prize-money going to a few horses to get the show on the road. It is going to take time.

“But it can happen only over a five- or ten-year period, so we’ve got to have courage and stick to our guns.”

From the BHA’s perspective, the ‘carrot’ for owners and, hopefully, breeders will come in the form of returns on the racecourse.

Quinn says: “Anything we can do to increase the prize-money of these races will give us the biggest chance of getting owners and trainers to change their behaviour, and so will helping the TBA to find an effective and meaningful breeders’ incentive to get people to patronise middle-distance sires more. That’s going to be something that will drive breeders’ behaviour.

“We’ve produced a leaflet detailing all the improvements to the stayers’ programme and prize-money increases which will be available for the sales.

“We’ve got to keep trying to find different and effective means to tell people about this.”

The staying division could hardly have had a better poster boy this season than Stradivarius, who was a winner before he turned three.

Quinn adds: “One of the things that came out of the questionnaire sent out in 2016 was the suggestion to have a big bonus scheme linking some of the key cup races.

“Weatherbys Hamilton obviously sponsors the Lonsdale and they came to us and said they’d been putting some ideas together.

“We talked back and forth about some of the races that they were looking to include in the Stayers’ Million. The BHA was very supportive but Weatherbys Hamilton needs a lot of credit for actually pulling it off.”

Weatherbys Hamilton does indeed deserve credit, especially having had its big pot plundered in year one. But anyone who owns, breeds and trains racehorses will be aware just how extraordinary are the achievements of Stradivarius.

Winning the Stayers’ Million remains a devilishly difficult thing to do, as does changing the mindsets of people averse to breeding and racing stayers.

But that doesn’t mean it shouldn’t be attempted, and the determined challenge currently being mounted by the BHA and associated groups deserves to be supported.

Up Next
Munir and Souede to disperse bloodstock