The best was saved until last during the opener to the Goffs November Sale on Monday as a son of sire-of-the-moment Mehmas sold for €140,000 to dominate trade.

The very last lot through the ring on a buoyant day of selling, the colt became the subject of a heated duel between pinhooker Willie Browne and Tony O’Callaghan of Tally-Ho Stud, where Mehmas stands, with the latter ultimately coming out on top.

“We saw him July and tried to buy him out of the field then but they wouldn’t sell him,” said O’Callaghan. “So we came back to buy him today and he’ll be back for resale next year.

“What can you say about Mehmas? He’s an absolute star. He had a very good Breeders’ Cup meeting – Malavath ran a very good second in the Juvenile Fillies Turf and Going Global won the Grade 2 [the Goldikova Stakes]. It’s all going the right way for him.”

Sold by Vinesgrove Stud, the colt was bred by Vivienne Anne Bird out of the winning Dutch Art mare Dutch Monarch, whose yearling by fellow Tally-Ho resident Galileo Gold realised €95,000 in the same ring during the Orby Sale. In turn, she is a half-sister to this season’s smart two-year-old Gwan So and from the fine Cheveley Park Stud family of Regal Rose and Regal Reality.

With pinhookers keen to restock after a surprisingly strong autumn of yearling trade, the day returned figures akin to pre-Covid levels with 174 foals – 77% of those offered – selling for a total of €3,384,000. The average increased by 41% to €19,451 while particularly encouraging was the median, which rose by 60% to €16,000.

The €140,000 ceiling is believed to be the highest price ever recorded at this sale’s opening session. 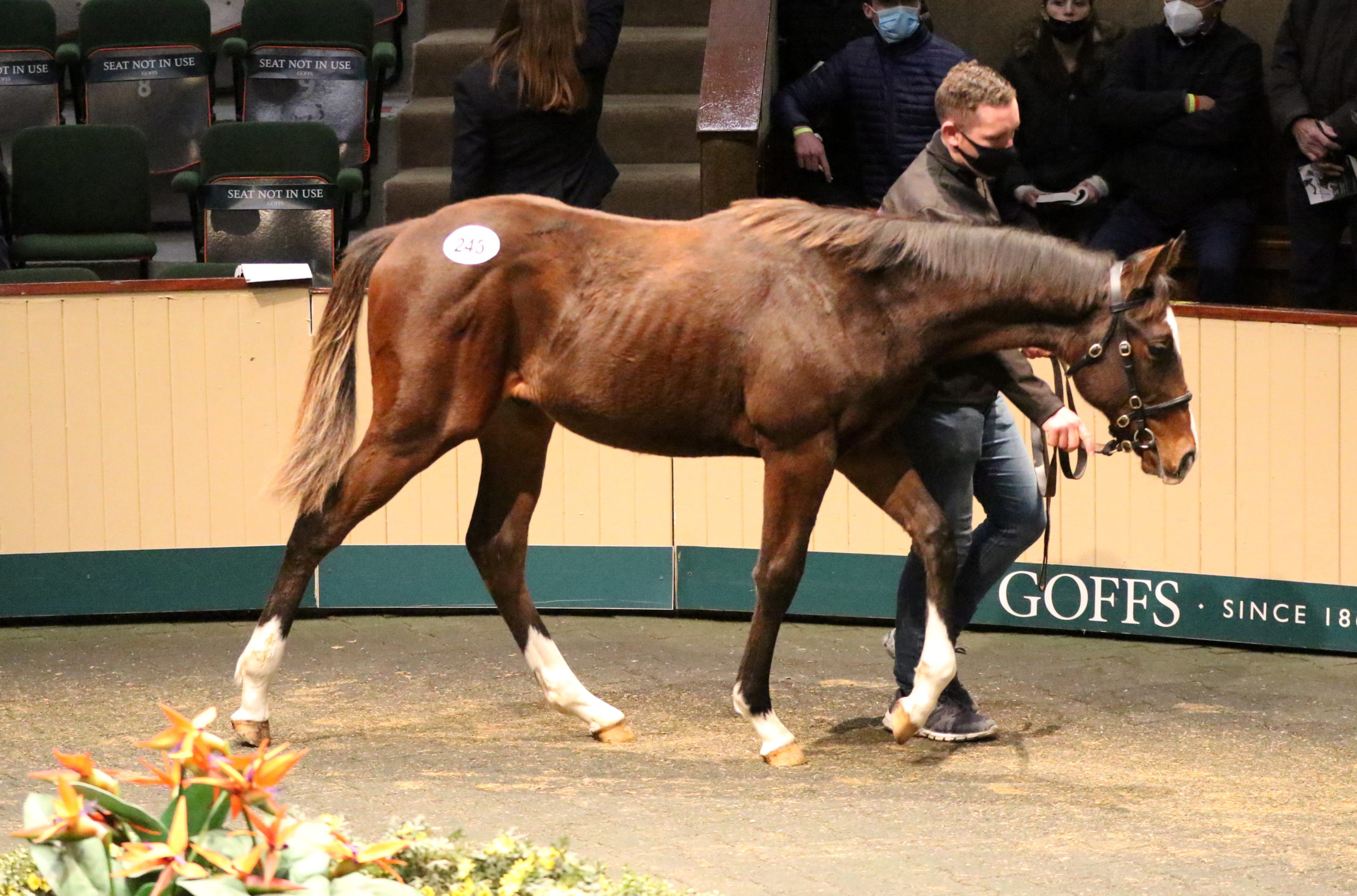 Meanwhile, an investment made over 20 years ago provided yet further rewards for Airlie Stud in the sale of its Starspangledbanner filly for €62,000.

It was back in 2000 that Sonia Rogers purchased Goldthroat, a Zafonic member of Meon Valley Stud’s high-performing Reprocolor line, for 100,000gns through John Dunlop. Goldthroat went on to win once at two and in keeping with her own family, has since forged her own legacy at Airlie as the dam of eight winners led by the Group 1-winning two-year-old Zafisio.

On Monday, the success story continued as her granddaughter, produced by Goldthroat’s Verglas daughter Sandtail, commanded €62,000 from pinhooker Flash Conroy of Glenvale Stud to lead the first half of the opening session.

“My mother bought Goldthroat off Lady O’Reilly,” recalled Airlie Stud’s Anthony Rogers. “We like Starspangledbanner – we do a few things with Anthony Mithen of Rosemont Stud [who stood Starspangledbanner initially in Australia] and he’d obviously know the horse well. This was a lovely filly with a bit of scope, and for that we’d have to credit Starspangledbanner as the mare isn’t that big.”

He added: “I suppose after that we’ll have to look at Starspangledbanner again for next year.”

Conroy has more reason than most to target the progeny of Coolmore’s Starspangledbanner, notably in light of the fact that recent graduates of Glenvale Stud include Cheveley Park Stakes runner-up Flotus, herself a €65,000 pinhook out of this sale two years. Conroy’s draft at this year’s Orby Sale also included a filly by the sire who blossomed from a €36,000 foal into a €250,000 yearling.

“We’ve been very lucky with the sire,” said Conroy. “He’s a top stallion and one that we really like. We had Flotus by him and this was another lovely filly.” 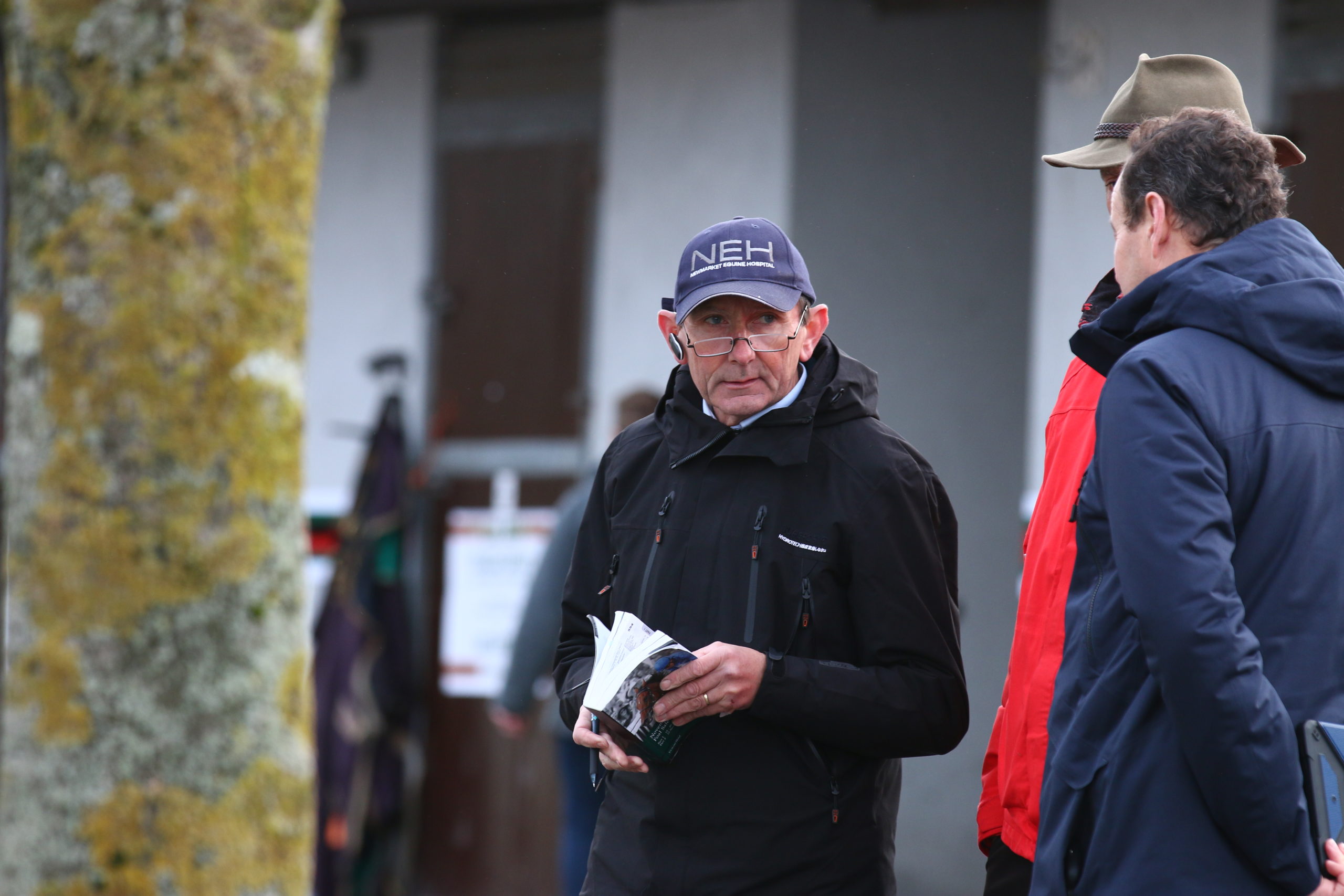 Flash Conroy: “had a lot of luck with Starspangledbanner”. Photo – Goffs

An excellent result also came the way of Ballylinch Stud’s managing director John O’Connor and his sister Anne Hallinan thanks to the sale of a Make Believe colt for €60,000 to Noel Carter, signing as Rathmoyle Exports.

By one of Ballylinch Stud’s core stallions, he represents two generations of cultivation by his breeders as a son of Swish Dancer, a Whipper half-sister to Middle Park Stakes winner Astaire.

Further back, it is the noted Roo family of Mohaather, Accidental Agent and Perotto. O’Connor and Hallinan bought into the line with the 17,000gns purchase of his second dam, Runway Dancer, as a two-year-old in 2005.

“I’ve been an admirer of that family for a long time,” said O’Connor. “In fact, I was underbidder on Roo a long, long time ago. It’s a very good family and one that has been lucky for us as well.

“We bred Astaire out of Runway Dancer and then we retained Swiss Dancer. She fractured her pelvis in training and we could never get her back to the same level.”

Swish Dancer is the dam of five foals to date, among them minor winner Bridge Focuswish.

“This was always a very good-looking colt with scope, a good action and mind,” said O’Connor. “He’s typical of the scopey, good-looking Make Believes that tend to be popular with trainers. I think they’re finding now that if they get to a certain level, then they’re easy horses to resell. We saw that at the recent horses in training sales with the likes of Makram [sold for 340,000gns] and Third Kingdom [sold for 135,000gns]. I think we’ll have to think about sending the mare back to him now – back to the scene of the crime!”

He added: “He’s been bought by a clever man whose pinhooking forays I have admired for decades. Noel is a proper stockman and I know that the horse will come back as a yearling as the best he can be.”

Earlier in the session, Ballylinch Stud had gone to €48,000 for a first-crop daughter of its resident Arc hero Waldgeist. Offered by breeder Knockainey Stud, the filly is a half-sister the Listed-placed Kodiac Gal.

“We’ve been around and seen pretty much all of the Waldgeist foals here and I’m really happy with what I’m seeing,” said O’Connor. “I’m seeing a trend of nice-looking, free-walking, good-tempered horses. My experience with stallions is that if the first foals look attractive and athletic, then that is a great start, and I’m delighted to see that coming through so early with Waldgeist.”

A son of Ten Sovereigns was the pick of the foals by the first-crop sires on offer, selling for €52,000 to FC Bloodstock. Sold by Arglo House Stud, his sale contributed to a day that saw the Coolmore stallion return an average of €36,000. 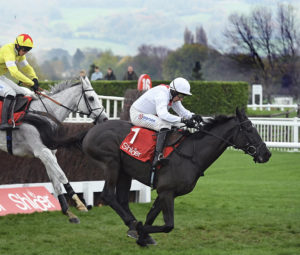 Up Next
Red-letter day for team Skelton at Cheltenham