Stars in the making

Just as Sea The Stars did himself, members of the first crop of Christopher’s Tsui’s champion galloper have really come into their own since turning three. The Gilltown Stud stallion has enjoyed a rash of winners this spring, most notably during the last week with the Listed-winning duo of Taghrooda and Anipa.

The pair took out two key Oaks trials – the Pretty Polly Stakes at Newmarket and the Cheshire Oaks at Chester – and while the John Gosden-trained Taghrooda currently heads the betting for the fillies’ Classic, trainer Roger Varian has indicated that his diminutive charge Anipa is more likely to head to Royal Ascot to contest the Ribblesdale Stakes.

My Titania became Sea The Stars’ first Group winner, and his only juvenile black-type winner to date, when the Tsui homebred landed the Group 3 CL Weld Stakes for John Oxx last season. Another homebred filly, this time Vazira for the Aga Khan, added to her sire’s stakes tally with an impressive victory in the Group 3 Prix Vanteaux at Longchamp last month.

My Titania was forced to miss her engagement in the QIPCO 1000 Guineas after a poor scope but it still being aimed at the Irish version, while Casual Smile, by Sea The Stars out of Will Farish’s Oaks winner Casual Look, bids to lay down her own potential Classic marker when she runs in Saturday’s Lingfield Oaks Trial. Meanwhile, her paternal half-brother Munjaz, the winner of a decent Newmarket maiden at the Craven meeting and like Taghrooda owned and bred by Sheikh Hamdan, heads to the Derby Trial.

Impressive recent maiden winners such as Prince Of Stars, Hadaatha and Shamkiyr have all helped Sea The Stars to second spot on the second-crop sires’ table for Europe, just behind French-based Le Havre on prize-money but equal with the Haras de le Cauvinière resident by number of winners for the season. With 15 winners from 46 runners, Sea The Stars currently boasts a strike-rate of 33%. 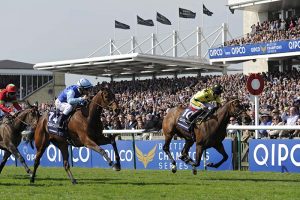 Up Next
Miss France flies in the 1000 Guineas