Having already exceeded expectations in his third season as a fully-fledged conditional, Stan Sheppard is hoping to end the season much as it began.

Lying fifth behind Harry Cobden in the race for Conditionals’ title, the 19-year-old is a son of Herefordshire-based trainer Matt Sheppard who has held a training licence for over two decades.

From a young age, Sheppard took what is a traditional route into the the realms of jockeyship. His mother took him to pony club and the family did plenty of hunting. It then progressed to pony racing and then point-to-pointing.

Once school had run its course, he found himself presented with a golden opportunity in August 2014 to join champion trainer Paul Nicholls at his base in Somerset.

“I came out of school and went straight to the racing school for four weeks and then came straight down to Ditcheat after that,” said Sheppard.

However, his first experience on the racecourse wasn’t exactly one he was hoping for back in October that year.

Sheppard continued: “My first ride under rules was at Exeter and the horse I was riding broke his leg at the third which wasn’t very nice.”

Since then, he has let his riding do the talking and has been given plenty of chances by Nicholls including at his first Cheltenham Festival. He had a couple of rides including on the well-fancied Dreamcatching in the Fred Winter.

“After the first day when I fell at the first fence I thought Christ it can only get better from here,” says Sheppard.

“I then had a sixth and a 12th and after that I just enjoyed it. We think quite a lot of Dreamcatching he’s definitely above-average.”

The 5lb claimer’s currently tally of 24, four more than his season’s target, has been helped by his father’s good run of form this term as well.

Back in February he got ride of the month for partnering one of the yard’s current shining lights, nine-year-old gelding Rock On Rocky. Having not won for two and a half years, Sheppard delivered him to get up on the running in the handicap chase at Uttoxeter.

He said: “He’s quirky. He had a good first year and got quite a high rating and struggled to win after that.

“He came down the handicap but still wasn’t really playing ball. We gave him a wind-op and once he won the first he loved it again.”

Sheppard is earmarked for a ride in the Conditional Jockeys’ and Amateur Riders’ race which will bring the curtain down on the Randox Health Grand National Meeting this weekend.

With the news announced last week of jockeys’ licencing procedures being overhauled, Sheppard will be looking to join the 12% of course attendees to ride out their claim.

“The plan is to turn professional. Hopefully I’ll ride out my claim by next year,” Sheppard added.

“I think there are a lot of jockeys who struggle and put themselves through it for nothing. I’ve been to Newmarket and I think its very easy to get a licence. They cram it into the four days.” 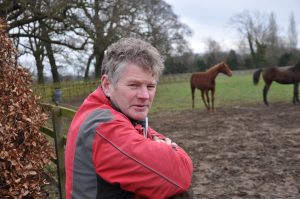 Up Next
Acorns from oaks