Coolmore’s outstanding globe-trotter St Nicholas Abbey was put down on Tuesday morning after suffering a second severe attack of colic. The six-time Group 1-winning son of Montjeu was seven.

St Nicholas Abbey had been in recovery at the Fethard Equine Hospital in County Tipperary last summer. He underwent ground-breaking surgery after shattering a pastern on the gallops at Ballydoyle in July. He subsequently endured a second round of surgery when suffering from colic shortly after his initial operation, but recent bulletins on his progress had been upbeat despite some concerns over laminitis towards the end of last year.

On Tuesday, Coolmore issued a statement via its website which read: “Regretfully St Nicholas Abbey has lost his brave battle after suffering a colic this morning. Surgery revealed a severe strangulating colon torsion that was unviable and he had to be euthanised on humane grounds.

“This is extremely unfortunate as St Nicholas Abbey had been in terrific form, the laminitis was resolving very well and the fracture had healed better than expected.

Coolmore would like to thank the surgeons, the international experts and all the staff at Fethard Equine Hospital who gave him such excellent care 24/7. We would also like to thank the multitude of well-wishers for all the cards and messages of support for St Nicholas Abbey. He will be buried in the graveyard here at Coolmore.”

Unbeaten in three starts at two, St Nicholas Abbey capped his impressive debut season with a three and three-quarter length victory in the Racing Post Trophy which catapulted him to the head of the winter betting market for the Derby. However, he raced just once during his Classic season, finishing sixth to Makfi in the 2,000 Guineas, and was subsequently found to have some muscle damage in his hind-quarters.

Returning to the track at four, he resumed his winning ways with victory in the Ormonde Stakes, followed by the first of his three wins in the Coronation Cup at Epsom, where he was to run his final race in June 2013. He ended 2011 with a memorable strike in the Breeders’ Cup Turf at Churchill Downs in the hands of the then 18-year-old Joseph O’Brien before adding the Dubai Sheema Classic to his list of top-class wins during last season’s Dubai World Cup meeting.

In 21 starts, St Nicholas Abbey won nine times and was placed on another nine occasions for a prize-money tally just shy of £5 million.

Bred by Barton Bloodstock and Villiers Syndicate, he was a son of the Sure Blade mare Leaping Water and was purchased as a yearling at Tattersalls by Demi O’Byrne for 200,000gns. 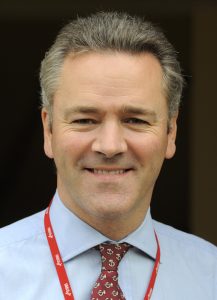 Up Next
New London Sale venue for Goffs