A ‘horse of a lifetime’, Sprinter Sacre, has been retired by connections at the age of 10 having picked up a tendon injury.

The dual Champion Chaser looked in fine fettle as he was paraded around the Cheltenham paddock after Seven Barrows broke the news on Sunday. His appearance came just before the Schloer Chase, a race which he won on his comeback 12 months ago.

One of the most impressive-looking chasers to have graced the National Hunt game, Sprinter Sacre’s career really took off once faced with the larger obstacles. This is not denying that he was a pretty good hurdler, demonstrated by his third behind Al Ferof in the 2011 Supreme Novices’ Hurdle.

Nicky Henderson sent him chasing that December and rolling the clock forward to March, he gave Cue Card a seven length beating in the Arkle Challenge Trophy.

A son of German Group 2-winner Network, he reappeared at the Festival the following year to contest the Queen Mother Champion Chase, after four more Grade 1 triumphs. He dispatched Henry De Bromhead’s Sizing Europe, a former winner of the race, by a comprehensive 19 lengths.

The unexpected happened that Christmas, when Barry Geraghty was forced to pull him up in the Grade 2 Desert Orchid Chase. It was revealed he had an irregular heartbeat, leaving his future as a racehorse in a shroud of doubt.

The Seven Barrows team supported by equine heart expert Celia Marr, managed to get the Caroline Mould-owned superstar back to the track at the start of 2015.

His former exuberance and spark looked to have disappeared, especially when he was taken out of the Champion Chase by Geraghty before the last. However the impossible dream was realised last season, when he came galloping clear up the Cheltenham hill under Nico de Boinville to reclaim his Champion Chase crown.

“What happened last year was something that’ll never be repeated. Not in my lifetime, anyway. In terms of emotions, anyway, it took us all to the brink, I think. So having to call an end to it is tough as well,” reflected Henderson.

He added: “Listen, he’s alive and kicking. We’re not at a funeral, we’re at a celebration of his life. We’re just going to miss him. It’s somebody that’s going out of our lives.”

He made good horses look ordinary

Last weekend was clearly a difficult one take for Geraghty, as another old partner of his, Simonsig, suffered a fatal injury on his comeback. The 37-year-old steered Sprinter Sacre to victory in seven of his nine Grade 1 wins.

“Sprinter was a brilliant racehorse. He was special, he had so much pace, he jumped with so much ease, he made good horses look ordinary. You could go where you wanted with him in a race,” said Geraghty on his At The Races blog.

“He is a gorgeous horse too, the perfect racehorse. Everything about him, his conformation, his shape, his athleticism, but also his manner, his attitude. He just wanted to please in his races,” he added. 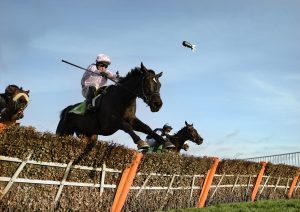 Up Next
Greatwood joy for Harvey