It’s always lovely to see a former top-class racemare doing well at stud, particularly under National Hunt rules, where the mares in question have had plenty of opportunities to work their way into the public’s hearts before beginning their stud careers.

One such example is the former Martin Pipe-trained Lady Cricket, winner of 11 jumps races including the 2000 Thomas Pink Gold Cup at Cheltenham and the 2002 Game Spirit Chase at Newbury. She is doing very well at stud now, so far most notably courtesy of her six-year-old Galileo daughter Swing Bowler, who most recently finished third behind My Tent Or Yours in the Betfair Hurdle at Newbury.

Bidding to follow in the footsteps of Lady Cricket is J. P. McManus’s lovely mare Like-A-Butterfly, one of the few racemares who took even higher rank than Lady Cricket. Arguably the most famous of Like-A-Butterfly’s 11 victories was her triumph in the Supreme Novices’ Hurdle at the Cheltenham Festival in 2002 when she landed a huge gamble for her owner, getting home under Charlie Swan as the 7/4 favourite, beating Westender, the second favourite who was representing the Martin Pipe/AP McCoy combination, by a neck.

She subsequently landed a second Grade 1 hurdles victory (and third Grade 1 overall, having recorded her first top-level strike when taking a Grade 1 bumper at Leopardstown in 2001) by beating Limestone Lad by a head in the 2003 AIG Europe Champion Hurdle at Leopardstown.

Like-A-Butterfly proved equally adept once Christie Roche had sent her over fences, eventually bringing the curtain down on an illustrious career with a terrific victory under AP McCoy in the Grade 2 John Smith’s Mildmay Novices’ Chase at Aintree in April 2005.

Now Like-A-Butterfly (a daughter of the Alleged stallion Montelimar whose offspring also includes the 2005 Grand National winner Hedgehunter) has bred her first winner, her five-year-old High Chaparral daughter Speckled Wood having carried McManus’s colours to victory in a maiden hurdle at Thurles on 13th Februar.

Tragically, Like-A-Butterfly got off the mark as a broodmare posthumously, having died a few days previously of complications which arose shortly after she had given birth to a colt foal by Yeats. 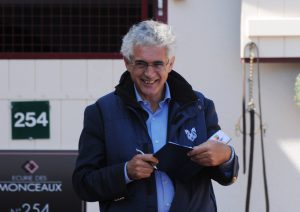 Up Next
New-look August for Deauville sales