In a remarkable turn of events that mirrored what had happened the previous day at Del Mar, trainer Charlie Appleby saw one of his Breeders’ Cup runners withdrawn after an incident in the starting stalls, only to win the race with his other representative.

Just as Modern Games made light of Albahr’s withdrawal to capture the Juvenile Turf on Friday, Space Blues proved best in Saturday’s Grade 1 Mile after stable companion Master Of The Seas was taken out of the race on veterinary advice.

In truth the mile contest proved incredibly simple for favourite Space Blues and William Buick, making excellent use of their low draw to secure a lovely position behind the leading pair on the rail.

With Smooth Like Strait and Umberto Rispoli setting a far from hectic gallop, Buick always looked in control on the son of Dubawi. He eased his mount off the rail turning into the home straight and asked Space Blues to put the race to bed, which he duly did with the minimum of fuss, picking up well to record a decisive victory over Smooth Like Strait and the running-on Ivar.

Returning to the winner’s circle, Buick said: “I had a good trip, but I expected a little bit more pace. I knew this horse had a turn of foot, but a mile stretches him, so I was glad they went a slow pace.

“This horse really is one of my favourites. I wanted to do him justice and go out with a win. I probably felt a little more pressure than I usually would because of that. I wanted to give him what he deserved.

“He’s been a great horse for us and now he’ll go to stud and hopefully become a great stallion.” 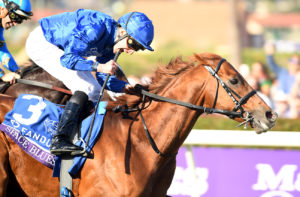 The team of Godolphin, Charlie Appleby and William Buick were soon celebrating a double on the afternoon – and their third winner over the two days – courtesy of Yibir’s victory in the Breeders’ Cup Turf (1m4f).

Held up at the back of the pack by Buick, Yibir made his effort on the outside of the field turning for home, and the Dubawi gelding responded to his rider’s urgings to run down Broome near the finish to score by half a length, with the Roger Varian-trained Teona a length and a half away in third.

The Breeders’ Cup is styled as the World Championships of horseracing and it lived up to its billing as Loves Only You provided Japan with a first ever winner at the meeting in the Grade 1 Filly & Mare Turf.

Defending champion Audarya and Coolmore’s Love looked to give Europe a strong hand in the 11-furlong contest but the former suffered a luckless run on the inside under William Buick, while Love was pushed wider than ideal when Ryan Moore tried to make his challenge around runners.

War Like Goddess, settled in last place by Julien Leparoux as Going To Vegas and Umberto Rispoli set the fractions up front, made a big move turning for home and looked to be in pole position in the straight. Yet just in behind, Yuga Kawada conjured a late rattle from Loves Only You, who found a lovely gap between War Like Goddess and the fast-finishing My Sister Nat to edge ahead near the finish and take the spoils.

“I don’t understand the question because I don’t speak English,” said a nevertheless delighted Kawada in his post-race interview as he returned to the winner’s enclosure on the five-year-old daughter of Deep Impact, trained by Yoshito Yahagi for owner DMM Dream Club Co.

Remarkably, Yoshito Yahagi and Japan enjoyed a second triumph on Breeders’ Cup Saturday after outsider Marche Lorraine and Oisin Murphy nosed out Dunbar Road and Jose Ortiz in a tremendous finish to the Grade 1 Distaff (1m1f) on dirt.

With the fancied runners, including favourite Letruska and Private Mission, setting unsustainably quick fractions up front, the race was set up for a closer, and Murphy, who recently captured his third Flat jockeys’ title, delivered Marche Lorraine with a terrific late run to get up right on the line. 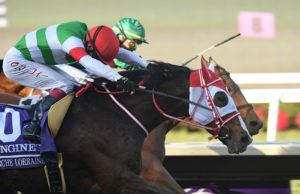 “This is a dream come true to win on a Japanese horse,” said Murphy in his post-race interview, having won his first ever race at the Breeders’ Cup. “To win a Grade 1 on dirt, for me personally, this is the biggest stage in the world.

“I grew up watching these races as a small child. It’s the highlight of the autumn after the Arc and Champions Day. The filly travelled super. Mr Yahagi has had two winners today – what an unbelievable training performance.

“I try very hard to get on the best horses I can around the world. I’m only 26 years old. These are the opportunities I crave.”

There was also a thrilling climax to the Grade 1 Breeders’ Cup Sprint as Aloha West and Jose Ortiz flew home to nab Dr Schivel and Flavien Prat right on the line in the six-furlong contest on dirt.

A wickedly fast pace played into the hands of Aloha West, last seen finishing rapidly to grab second in the Grade 2 Phoenix Stakes at Keenland, and as the leaders, including hot favourite Jackie’s Warrior, wilted, it was left to the son of Hard Spun to pick up the pieces.

Ortiz said immediately after the race: “I was rolling on the outside and I thought I had it. If I moved sooner on him last time, I would have won that race.”

Winning trainer Wayne Catalano, who was celebrating his fourth Breeders’ Cup victory, told Nick Luck: “I’m light on horses at the moment and this is the pinnacle of my career.”

Irad Ortiz Jr enjoyed a quickfire Grade 1 double on Breeders’ Cup Saturday, making all the running on the Wesley Ward-trained Golden Pal in the Turf Sprint (5f) as 2020 heroine Glass could only manage eighth, and repeating the dose aboard Life Is Good, trained by Todd Pletcher, in the Dirt Mile (1m).

The most valuable race of the meeting, the closing Grade 1 Breeders’ Cup Classic (1m2f), saw the Brad Cox-trained Knicks Go and Joel Rosario make every yard of the running to take the first prize of £2.2 million. 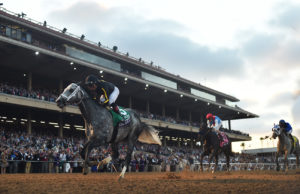 Knicks Go and Joel Rosario make all the running to take the Classic | Photo: Bill Selwyn

A five-year-old son of Paynter, Knicks Go was winning his third top-level race of 2021 after his victories in the Pegasus World Cup at Gulfstream and Whitney Stakes at Saratoga.

Three-year-olds Medina Spirit, winner of the Kentucky Derby in May for the Bob Baffert stable, and Belmont Stakes hero Essential Quality, like Knicks Go trained by Brad Cox, filled the places. 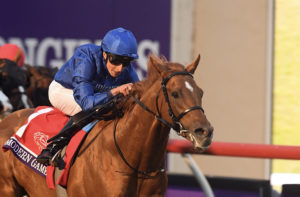 Up Next
Modern Games strikes in controversial Juvenile Turf